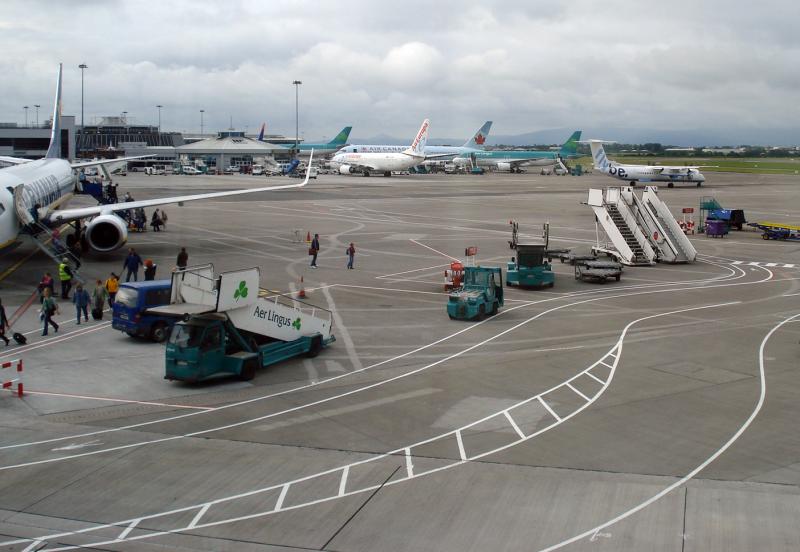 Andrea Brennan, contributing writer for the State Aviation Journal shared the following airport briefs after her recent trip to Ireland.

Looking out from the new terminal.

Dublin Airport is expanding and modernizing its operations—construction is ongoing in many areas. Walking from a gate in the older area of the airport to the new terminal can take fifteen minutes or longer, even when using the moving walkways. The new terminal has dozens of shops along the aisles and in the gate waiting area; an Irish traveler who has been flying between the U.S. and Ireland since the 1960s noted that shopping is a recent addition. The waiting area includes computer terminals at semi-private kiosks and Wi-Fi, allowing passengers Internet access for a fee. Another Irish traveler explained that the construction and modernization reflected the recent boom years of the Irish economy, although the current worldwide recession adversely affected tourism, including air travel.

Shannon Airport is also undergoing renovation and expansion to handle expected increased traffic. Several gates were in various phases of construction, requiring passengers to walk past exposed walls and ceilings. However, the airport offers free Wi-Fi access throughout the facility, a convenient feature for the civilian and military travelers waiting for their flights. The airport added several kiosks inside the secure area to allow travelers to turn in their value-added tax rebate (VAT) forms and spend their remaining Euros; these were not available in the old terminal, said a man who had been flying from Shannon since the 1960s. The U.S. Customs and Immigration area had new security requirements for non-U.S. citizens, but all travelers flying non-stop to the U.S. were processed prior to boarding, which eliminated the need to get passports stamped upon re-entry to the U.S. This saved time for some passengers—one American was able to catch an earlier connecting flight because she didn’t have to wait in line when she landed in Chicago.