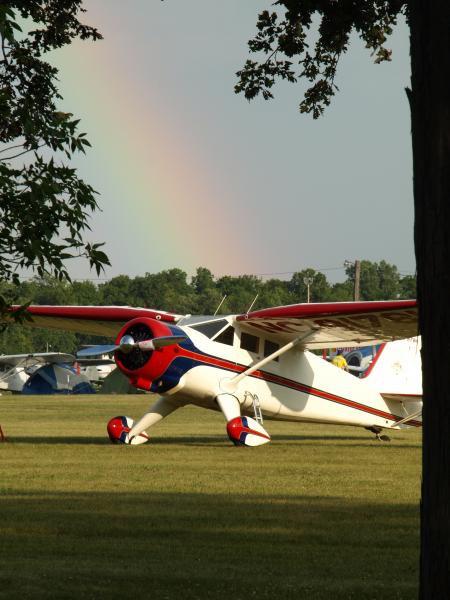 If rainbows are a harbinger of good luck, AirVenture 2009 should sail into the week in excellent shape. On Sunday, the day before the kick-off of this year’s event, several rain showers blew through Wittman Regional Airport in Oshkosh, Wisconsin leaving vivid rainbows in their wake. Attendees scrambled to get photographs of the pot of gold under the wing of their favorite aircraft. In one instance a double rainbow could be seen in it’s entirety stretching from the airport terminal building to the North, to the approach end of runway 36R to the South.

For those who speculated that the economy might dampen participation at this year’s annual Experimental Aircraft Association extravaganza, they didn’t have to wait long to get a good indication of what the week might hold. One flight line volunteer was overheard saying that this (Sunday) feels like opening day!

Airshows around the country have reported that attendance has been good in spite of the down economy. With the line-up that’s being offered this week, AirVenture 2009 should be no exception.