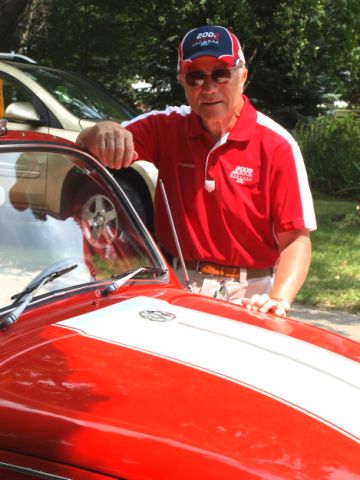 Tom Poberezny and the Experimental Aircraft Association (EAA) jointly announced on Tuesday that Poberezny is retiring as chairman of the association and AirVenture Oshkosh after decades of leadership and success.  (Photo by Kim Stevens)

Louie Andrew, vice president of the EAA Board and chairman of its Executive Committee, said the Board unanimously passed a resolution praising Poberezny for his leadership to the group and success in helping make the nonprofit organization the world’s leading aviation association. Andrew also said the Board thanked Poberezny for his many contributions in making AirVenture Oshkosh the world’s premier aviation event that draws pilots, airplanes, members and guests from around the globe every year.

Poberezny has led EAA – now in its 58th year – since 1989, when he assumed the top position after his father, Paul, retired from active day-to-day involvement. He has served as chairman of the annual EAA Convention for more than 30 years and will assume the title of chairman emeritus Aug. 1, when his retirement is effective.

Andrew said that Tom, like his father, has been a visible leader for EAA and a mentor to thousands of flight enthusiasts, especially the countless young people that he has helped understand and become involved in the wonder of flight and the importance of aviation to our society. We will miss his daily involvement and valuable input, but we are happy to know that he will continue to be a good friend and an informal adviser as we move into an exciting future.

Tom Poberezny will continue to be an ambassador for EAA and its many programs. He said that he is so proud of what has been accomplished during his tenure. That includes increased attendance at the convention to the expansion of their facilities and programs.
Poberezny added that he is especially proud of the Young Eagles program, an effort to reach out to millions of young people and introduce them to the marvel of flying and flying machines.

Poberezny said he feels fit and enjoys the work, but added that “fresh thinking and new ideas are the fuel to propel us forward. EAA is well-positioned to step into the future with confidence, strong leadership and a promising outlook.”

Rod Hightower, current EAA president and CEO, will assume Tom Poberezny’s responsibilities. Andrew said that Hightower’s work with Poberezny over the past year prepared him well for the new duties.

Hightower said Tom has left big shoes to fill, and he’ll work hard to do his best for EAA members, their business partners, the aviation community and the entire Fox Valley area, especially Oshkosh.

EAA embodies the spirit of aviation through the world’s most engaged community of aviation enthusiasts. EAA’s 170,000 members and 1,000 local chapters enjoy the fun and camaraderie of sharing their passion for flying, building and restoring recreational aircraft. For more information on EAA and its programs, call 800-JOIN-EAA (800-564-6322) or go to www.eaa.org. For continual news updates, connect with www.twitter.com/EAAupdate.