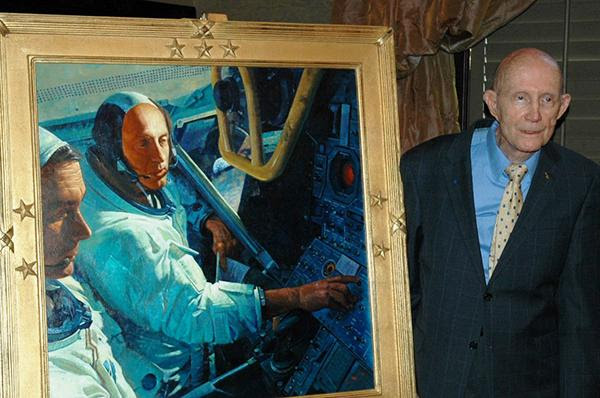 In a recent ceremony on the floor of the Oklahoma House of Representatives, state lawmakers approved a resolution proclaiming March 22, 2016, as General Stafford Day in Oklahoma in honor of retired general and former astronaut Thomas P. Stafford for his many contribution to the U.S. and the field of aviation.

Stafford, 85, attended the morning festivities, providing House members and a packed gallery with a short history lesson on the U.S. space industry at a time when the U.S. was deep into the Cold War. He also talked about his many missions in space, even detailing some of the events when he served as commander on Apollo 10. That mission was a dress rehearsal for Apollo 11, which eventually landed on the moon, solidifying the U.S. as the worldwide leader in space exploration.

“I thank God that I was included in that second group of astronauts who did the pioneering work that had never been done before and to carry out President Kennedy’s goal of going to the moon, walking there and returning safely within the decade,” said Stafford. “I was also very honored when I was chosen, along with Wally Schirra, to demonstrate and work out the techniques of the very first rendezvous in space in December 1965.”

Officials also unveiled an oil-on-canvas portrait of the general on the House floor, painted by renowned Oklahoma artist Mike Wimmer, which will be on permanent display inside the state Capitol. Following the ceremony, a reception was held in the general’s honor where legislators were given the opportunity to take pictures with Stafford.

Stafford grew up in Weatherford, Okla., and served as an astronaut beginning in 1962, flying in four historic missions (Gemini 6, Gemini 9, Apollo 10 and Apollo-Soyuz), three of them as mission commander. He was the first astronaut to become a general, eventually becoming a three-star lieutenant general. Stafford ended his career at NASA in 1975 but was later involved in the development of stealth technology, which eventually led to the development of the F-117 stealth fighter and B-2 stealth bomber.

Stafford now makes his home in the Florida Keys but returns to Oklahoma often to visit friends and family or to help promote Oklahoma’s aerospace and aviation industry.

“I am extremely happy for General Stafford. This recognition is certainly well deserved,” said Vic Bird, director of the Oklahoma Aeronautics Commission. “He has been a huge help to me and is always willing to lend a helping hand to promote the industry, whether it’s visiting with a state legislator or contacting someone from our state’s congressional delegation. I am proud to call him my friend.”