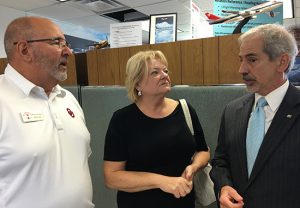 For those in the aviation-know in and around Norman, there is a reverence as one enters the gates of Max Westheimer Field in Norman. Locals recognize the rich history behind the legendary airfield, and in that area, from the grass to the heavens, it is a cathedral built for aviation with pavements in lieu of pulpits and pews.

Victor Bird, director of the Oklahoma Aeronautics Commission (OAC), brought his message of “airvangelism” today to the Norman Chamber of Commerce’s Aviation and Transportation Committee meeting at the Max Westheimer Airport terminal.

Daily, the Westheimer choir of aircraft engines, croon in the background singing a song of engineering excellence as commerce collides with the spirit of cooperation. The airport manager is the would-be minister, while air traffic control directs the choir of aircraft. With precision the community of congregants, are well served by this aeronautical assemblage. (Photo – Walt Strong, Airport Administrator, Representative Clauda Griffith, (D) Norman, and OAC Director Vic Bird visit about the Westheimer aiport projects.)

“We have had Director Bird out to speak to the group before, and he consistently does a great job of telling the story of aviation with enthusiasm. The Aeronautics Commission is also assisting our airport on a project to rehabilitate the parallel taxiway systems for runway 18/36 and runway 4/22. With a cost of $4.4M, we appreciate the efforts of his Airport Division staff and all they have done for Westheimer,” said Walt Strong, Westheimer’s airport administrator.

“Airports are ‘Gateways to the World’ for communities and are tremendously important in generating economic activity. I speak in gest about my being an airvangelist, but in reality, our agency is tasked in state statute to promote aviation throughout the state,” Bird said, “Speaking to local groups one at a time gets that resurgence rolling. Today we brought the message of the importance of aviation to Norman, reminding local leaders, elected officials, and business owners that Westheimer is a treasure for the Norman community,” Bird said.

Oklahoma’s aviation and aerospace industry is one of the state’s top economic engines, providing more than 120,000 jobs and generating an economic impact of $12.5 billion annually.

Strong said, “There is no doubt that Westheimer plays a critical role to aviation in Oklahoma City and the surrounding areas. Our student aviation programs, general aviation traffic, and corporate based aircraft makes this airport a model of success for other airports to emulate. Vic and his staff do a great job going around the state emphasizing our airport system.”

With 137 public-use airports, including 110 that are publicly owned, Oklahoma is ranked in the top 10 nationally for the number of airports per capita. Oklahoma has more than 3,900 general aviation aircraft that are actively flying in the state and nearly 7,900 pilots. Out of the 110 publicly owned airports, 107 are general aviation airports, including 49 that are regional business airports. Forty-three (43) of those 49 have jet-capable runways of at least 5,000 feet in length.
“General aviation has an estimated $2.5 billion economic impact in Oklahoma,” said State Representative Claudia Griffith, (D) of Norman. “I was pleased to attend the luncheon today. This was the first time I have heard about the rich aviation history in Oklahoma that director Bird spoke about. My husband is a pilot and learned to fly right here at Westheimer field. We are proud of our airport in Norman and I support OAC’s efforts throughout the state,” Griffith concluded.

“About 97 percent of Oklahoma’s population is within 25 miles of a regional business airport and about 94 percent lives within 25 miles of an airport with a jet-capable runway,” said Bird. “The message of the importance of aviation in Oklahoma is critical to our airport infrastructure.”

The Oklahoma Aeronautics Commission’s mission is to promote aviation, which includes ensuring that the needs of commerce and communities across Oklahoma are met by the state’s 110 public airports that comprise the state’s air transportation system, and ensuring the growth and vitality of the state’s aerospace industry.