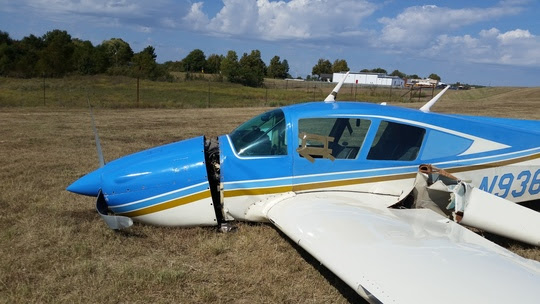 During a touch and go exercise this month at McAlester Regional Airport a single-engine aircraft lost power and crashed off the end of the runway in what is known to aviators across the country as the safety area. It is likely this smooth area of ground off the end of the runway saved the lives of both the pilot and the passenger from what would have been a deadly aircraft accident.

Airports like the one at McAlester are part of the Oklahoma Airport System which is maintained through the Oklahoma Aeronautics Commission (OAC). The state agency has purview over airport development at these 110 airports in the system and utilizes its three-year capital improvement program (CIP) to direct federal and state grant funds for projects such as the one that improved the safety area in question at McAlester. The almost $1.8M project was completed in 2014 and brought the runway safety area up to standards. These special, clear zones are constructed at the end of each runway in the event an aircraft lands short or runs long of the runway pavement. It is the most likely spot for an aircraft to crash during the takeoff and landing phases of flight.

“Our Airport Development Division has the important task of administering the FAA 5010 Safety Data Program for the state’s public-use airports. In addition to that, our airport inspections ensure these safety areas are up to standards at all of the system airports, and if they’re not, will recommend a project for inclusion in the state’s CIP to correct the non-standard safety area.” Dale Williams, deputy director of the OAC stated. “Last week, OAC officials went to McAlester Regional after the crash, and we believe that the safety area likely saved the lives of the pilot and passenger,” Williams concluded.

Oklahoma’s Airport System is maintained through the Oklahoma Aeronautics Commission (OAC) and the state agency has purview over airport runways and adjacent areas. Constructed special zones are designed at the end of runways to safely capture an aircraft’s landing gear should it miss the airstrip.