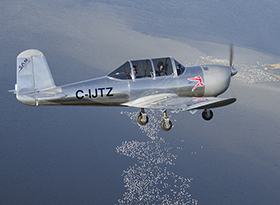 SAM Aircraft has received formal recognition from Transport Canada, stating the SAM LS is approved in the Advanced Ultralight class. Flying at a slightly lower weight in Canada than the US-spec SLSA (the aircraft is the same; only the gross weight differs), flight characteristics for both weights have now been determined by months of flight test. “We worked very hard to be sure that everything was done in conformance with both the LSA and Transport Canada rules and quality standards. We are happy to see that the SAM LS flies to our expectations,” said President Thierry Zibi, whose idea of a retro-look airplane with modern reliability, comfort, components, systems, materials, and build techniques is now reality.

Those expectations were high: edge-of-class performance, responsive handling  with linear stick forces, and great real utility are all available in an LSA with more shoulder room than found in the cabin of a King Air, and visibility to rival a helicopter’s.

Thierry Zibi is now offering and scheduling demo flight for the press and potential buyers at the SAM’s home airport in Lachute, Quebec, and has set up a funding system through Indiegogo.com.

SAM Aircraft is now taking orders for kits, with delivery dates available in 2013. This follows a comprehensive review of the approved design, which resulted in some kit price reductions (see attached brochure for final pricing). Firewall-aft kits start at $29,000USD.

The SAM LS is to be featured in several high-profile publications in coming months, and will of course be seen at Oshkosh; but the order book is open now, for kits and the ready-to-fly SAM LS.