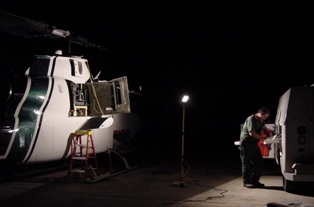 In a contest that drew hundreds of entries from professional photographers, an aviation maintenance technician’s self-portrait as he worked by himself under the lights captured the grand prize in ROTOR magazine’s first-ever photo contest. Pablo Linares of Ft. Worth, Texas, used a tripod and small digital camera on a timer to snap a shot as he worked on his helicopter’s swashplate friction one dark night. He said the picture shows one of the great truths of the industry: “Behind a great aviation department, there is always a great maintenance crew.”

The editors of ROTOR® asked readers to capture images of the industry in five categories: Helicopters at Work; Helicopters Serving the Community; Helicopters in the Military; People and Their Helicopters; and Cellphone Photos.
As grand prize winner, Linares collects a $500 prize. Each of the category winners will receive $50. They are:
Helicopters at Work – Michael Meadows for his picture of an L.A. County Fire Department helicopter making a water drop.
Helicopters Serving the Community – Michael Braithwaite for his picture of firefighters training to operate with an EMS helicopter.
Helicopters in the Military – John Ford for his photo of a Blackhawk helicopter accelerating at low altitude.
People and Their Helicopters – Pilot Desiree Horton for her timed self-portrait, as she stands by her helicopter looking at a dramatic sky.
Cellphone Photos – Kevin Franks, who used an iPhone 4S to capture a great sunset photo of three helicopters reflected in a pool of water.
All of the winning photos, as well as a number of honorable mentions, can be viewed online, and will be displayed prominently at HAI’s upcoming annual convention and trade show, HELI-EXPO, March 4-7, 2013, in Las Vegas.
ROTOR’s second annual photo contest will open for entries on August 1, 2013, with winners announced in the Winter 2014 issue.
HAI is the professional trade association for the international helicopter community. Its 1,600 company members and 1,400 individual members, in more than 70 nations, safely operate more than 5,000 helicopters approxi­mately 2.5 million hours each year. HAI is dedicated to the promotion of the helicopter as a safe, effective method of commerce and to the advancement of the international helicopter community.
Attachment: