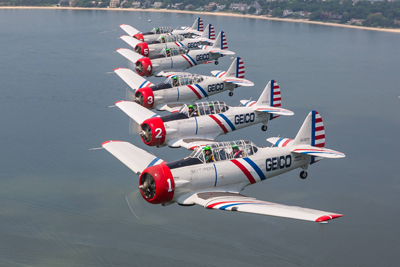 The GEICO Skytypers will perform at 15 different air shows in their 2014 air show schedule – an increase of 30% over the year following budget sequestrations that grounded many military demonstration teams and air shows. The 2014 tour includes four airshows at military bases – MacDill Air Force Base in Florida, Joint base McGuire-Dix-Lakehurst in New Jersey, Quonset Point Air National Guard Base in Rhode Island and Naval Air Station Oceana in Virginia — and first ever appearance at the internationally renowned experimental aircraft airshow in Oshkosh, Wisconsin.

The GEICO Skytypers perform a low-level precision flying demonstration at airshows utilizing six, vintage WWII aircraft. In addition to their air show performance, the team skytypes giant billboards in the sky. These dot-matrix style messages typed at 10,000 feet are 1,000 feet tall, can be viewed from 15 miles away in any direction, and are created 17 times faster than the more traditional sky writing method.

Two stops on this year’s GEICO Skytypers’ airshow circuit will also feature an air vs. sea race between the pilots and their water-borne counterpart, the Miss GEICO powerboat team. In Jones Beach, New York and Daytona Beach, Florida, airshow spectators will witness a first time event. Four GEICO Skytypers will fly along the waterfront in a tight formation and race Miss GEICO on the water below. The Miss GEICO powerboat team has won seven world championships in off-shore racing.

Later in the season, the GEICO Skytypers also plan to bring back a fan favorite from the 2013 season: a race of all six SNJ-2s against Bill Braack’s 10,000 horsepower jet car in Rome, GA.

In addition to skytyping, airshow performances and races, the team raises funds and awareness for children’s charities. The team gives presentations at youth centers, schools, hospitals, boys and girls clubs, community groups, ROTC programs, and veterans’ facilities. Many of these events have been hosted planeside with the team of pilots. Organizations interested in partnering with the GEICO Skytypers can request an event by visiting the GEICO Skytypers website (www.geicoskytypers.com ) or facebook page (http://www.facebook.com/GEICOSkytypers ).

Additional information, videos and photos are on the team’s website. Members of the media can request downloadable b roll footage for broadcast.

For more information, go to www.geicoskytyers.com.