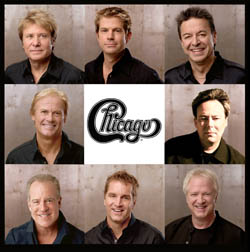 After a full opening day of flying on Monday, July 26, at EAA AirVenture Oshkosh 2010, AeroShell Square will feel the power of more than aircraft, as the legendary band Chicago takes the stage that evening, courtesy of Ford Motor Company.

The performance, free of charge to all AirVenture guests that day, will be held adjacent to the Ford Motor Company Hangar on AeroShell Square, immediately following the afternoon air show.

"One of the questions I regularly receive from EAA members and AirVenture attendees is ‘Who will be the opening-day concert at Oshkosh?’" said Tom Poberezny, EAA president and AirVenture chairman. "For the fifth consecutive year, Ford is making it possible for this popular tradition to continue by supporting the appearance of Chicago at AirVenture 2010.  This is very exciting news and we’re already looking forward to it!"

Like EAA AirVenture, Chicago is known the world over.  It has attracted multiple generations of fans over 40 years of recording.  Led by founding members Robert Lamm, Lee Loughnane, James Pankow and Walt Parazaider, Chicago’s jazz-infused "rock ‘n roll band with horns" sound has created hits in five decades – an accomplishment matched only by the Rolling Stones in pop music history.

"Over the past decade, Ford has been proud to be a part EAA AirVenture, The World’s Greatest Aviation Celebration," said Kevin Keling, Ford Corporate Events Manager.  "We’re very happy to help support EAA, all EAA members and this great event in a variety of ways, including bringing top entertainment such as Chicago to aviation’s annual family reunion."

Chicago’s style is instantly recognizable and has left its unquestioned mark on music history.  From their first top 40 hit in 1970, "Make Me Smile," through No. 1 hits such as "If You Leave Me Now," "Hard To Say I’m Sorry," and "Look Away", and classic songs such as "Does Anybody Really Know What Time It Is?" and "25 or 6 to 4," Chicago has created an instantly identifiable legacy that continues to thrill longtime fans and welcomes a new generation to their music.

In September 2008, Billboard Magazine named its Top 100 artists of all time, based on the Billboard Hot 100 singles chart.  Chicago’s extraordinary career landed it at Number 13, just behind artists such as the Beatles, the Rolling Stones, Stevie Wonder and Elvis Presley, and just ahead of Marvin Gaye, Prince and Rod Stewart. Chicago have the distinction of being the top American band on that list.

More information is available at the band’s website at www.chicagotheband.com.

The opening-day concert at EAA AirVenture, along with Ford Motor Company’s support of the nightly Fly-In Theater, are among the experiences embraced by Ford and EAA to enhance the annual EAA AirVenture convention.  Ford also provides vehicles used during the event, a unique one-of-a-kind vehicle for the Gathering of Eagles fundraiser during AirVenture, support for a raffle vehicle and discounts on Ford Motor Company vehicles for EAA members.  Ford will also offer additional highlights and benefits for EAA members and AirVenture attendees during this year’s fly-in.