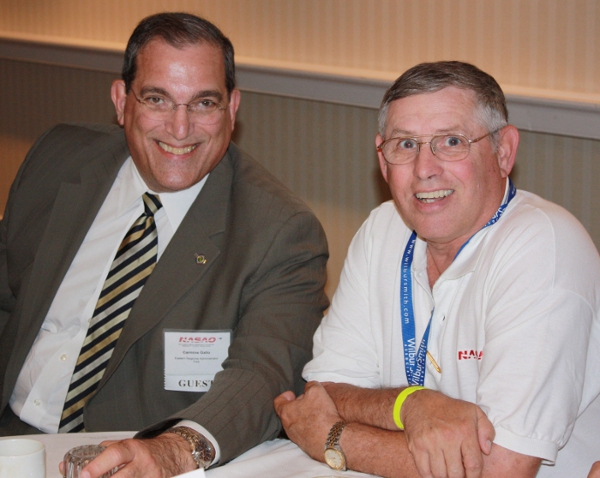 The National Association of State Aviation Officials, (NASAO) has worked hard for many years to create an atmosphere of trust and open communication with the FAA both at the national level and on the regional level.

To that end, NASAO and the FAA for many years have had either monthly, bi-monthly or quarterly telecons between the FAA Regional Administrators, their staff and state aviation officials from the states located in each FAA Administrator’s region.

These telecons, according to NASAO President, Henry Ogrodzinski,  facilitate communications, build relationships and enhance mutual problem solving on the regional level. He participates in most of them.
(Pictured are Carmine Gallo, Eastern Region FAA Administrator, left and Randy Burdette, NASAO Chairman)

For the first time this year, in conjunction with the 2010 NASAO Annual Convention and Tradeshow, held recently in Wichita, Kansas, state aviation officials and regional administrators used the national forum to share regional perspectives on issues impacting aviation in the various states and as a whole on the national level.

There have been annual region-wide meetings and according to Ogrodzinski, there have been as many as three different regions gathered together at a single conference. Last year in Tucson, the two organizations had a formal meeting of two FAA and NASAO regions, but, "this was the first time we tried a joint meeting of most of the regions, in the same room at the same time," said Ogrodzinski.

"I definitely felt that the opportunity for our FAA regional administrators to interact with our state aviation directors in a national forum was valuable and productive," said Barry Cooper, Regional Administrator for the FAA’s Great Lakes Region. "While each of us regional administrators have opportunities to collaborate with the directors from the states in our respective regions on a regular basis, bringing us all together in a national forum setting provided an opportunity to discuss issues of common interest from a variety of different perspectives."

David Gordon, Colorado Aeronautics Division Director, said that sometimes the regions interpret things a bit different, so it was good to get together and compare notes. "It was good to have some face to face time."

"I thought the meeting was very helpful and timely," said Ogrodzinski. "In fact, because of our excellent working relationship between FAA Regional Administrators and NASAO Regional Directors we are already very quickly working through a number of issues of mutual concern as a result of that meeting."  Ogrodzinski received very positive feedback, so far,  from both the FAA and NASAO participants.  "At this point we are very seriously considering another joint meeting at NASAO Nashville 2011," he said.