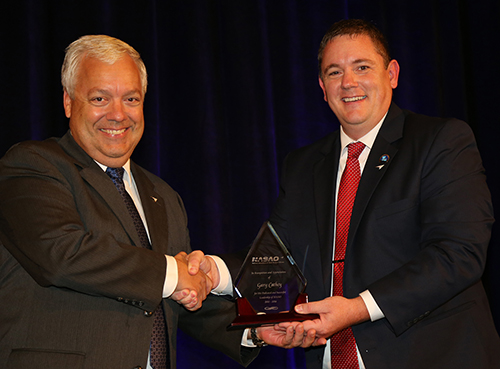 Members of the National Association of State Aviation Officials (NASAO) elected new officers for the coming year at its 85th Annual Convention and Trade Show held in San Antonio, TX earlier this week.

Brad Brandt, Aviation Division Director for the Louisiana Department of Transportation & Development, was named NASAO’s new Chairman, accepting the gavel from Gary Cathey (California) who will continue to serve as Immediate Past Chairman.

“I am honored and humbled to be selected as the chair of NASAO this year,” said Brandt. “I congratulate the new Executive Committee and Board of Directors on their appointments and I look forward to working with them as well as our NASAO staff on our important issues.” Brandt said they have many opportunities facing them this year as the board leads the association and seeks to positively impact the aviation industry at the national level. “We have a responsibility to preserve our national airport system and infrastructure, to protect our airports and airspace, and to promote aviation education and training in an effort to increase the aviation workforce in the communities we serve,” said Brandt.

Greg Principato, NASAO President and CEO said NASAO members have elected a strong board, under the leadership of Brad Brandt, to guide the association forward. “NASAO is well placed to play its essential role in the years ahead.”

Brandt has been a member of NASAO for seven years and previously served on the board as Secretary, Treasurer and Vice Chair. In addition to the Executive Committee, Brandt has served on the Center Board of Directors, AASHTO/NASAO Standing Committee on Aviation, Engineering and Events Task Groups and has served as a Regional Director.

Mitchell, Director of the Nebraska Department of Aeronautics, has been a member of NASAO since August 2009 and previously served as Secretary and Treasurer on the Board. He has been an active member of the Center Board of Directors, Land Use Committee and served as a Regional Director.

Isackson, Director of Aeronautics for the Minnesota Department of Transportation, previously served as Secretary of the Board, and serves as Chair of NASAO’s Air Service Committee.

Klein, who manages the Aeronautics Group under the Arizona Department of Transportation’s Multi Modal Planning Division, has been a NASAO member since 2009, serves as Chair of the Land Use Committee and has previously served as a Regional Director.

Together the NASAO Executive Committee and the NASAO Regional Directors comprise the NASAO Board of Directors.