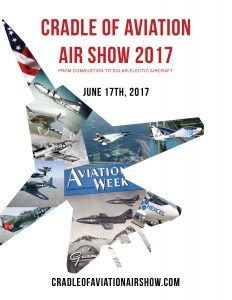 Luminati Aerospace is hosting the debut of the Cradle of Aviation Airshow on June 17th, 2017 to showcase the latest in electrically powered aircraft and pay homage to aviation’s golden past —  much of which took place on Long Island, the Cradle of Aviation. The Airshow will take place at the Luminati’s headquarters at the Former Grumman Naval Weapons Plant in Riverhead Long Island. To mark the occasion, Luminati will be unveiling Team Stratos — Luminati’s new team of aerospace scientists and engineers who will be designing and producing the next generation of solar-electric aircraft, bringing aerospace manufacturing back to Long Island.

The Cradle of Aviation airshow will be open to the public and free for all veterans and former Grumman employees. On aerial display will be two classifications of aircraft: Vintage aircraft from WWII produced by manufactures such as Grumman, Republic and Fairchild and electric/solar powered aircraft including the Luminati Aerospace V0 Substrata and others from this emerging field.  Nationally recognized Airboss Jeff Comeau will be in charge of the flight displays.

In addition to the aerial displays, The Cradle of Aviation Airshow has partnered with a number of aviation museums, flight schools, aviation clubs and local businesses who will be providing unique displays, speakers, children’s entertainment and a variety of local food vendors. Tickets and more information is available at the Cradle of Aviation Airshow website at www.cradleofaviationairshow.com .