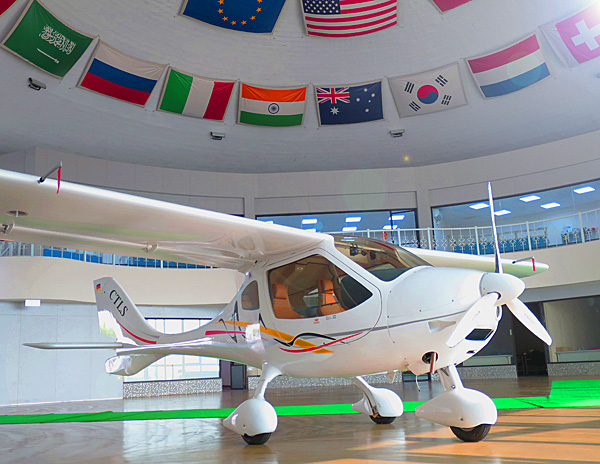 Since the beginning of Light-Sport Aircraft in 2004, the CT series, now led by the CTLS model, has been the best-selling model in the United States. After experiencing difficulties in mid-2016, Flight Design GmbH came to agreements with AeroJones Aviation and the company is in the final stages of acquiring all assets and technological rights to the CT series aircraft and C4 project.

Earlier, AeroJones pursued agreements with Germany’s Flight Design company to establish an aircraft production line to produce the CTLS, a primarily carbon fiber two-seater, equipped with a standard airframe parachute. Engineers from the German company assisted and oversaw efforts to establish AeroJones in Taiwan as a manufacturer, which process was completed earlier this year. AeroJones has produced full aircraft and is presently preparing to expand manufacturing.

“AeroJones Americas will be established in Florida as a centralized assembly and distribution facility for the AeroJones Aviation-produced CT series aircraft” said Chris Benaiges, CEO of AeroJones Americas. “This facility will ensure the strictest safety standards and quality control set. AeroJones Americas looks forward to working with and renewing all dealer contracts and leading the way with new and innovative technology in the CTLS aircraft.”

In 2016, CTLS earned Chinese Type Design Approval and an EASA Type Certificate. AeroJones Aviation has invested considerable resources to create a new manufacturing facility and built a quality system to assure repeatability. The large company’s significant experience in high-end production is a good fit for the manufacture of light aircraft, both fixed wing and rotary.

AeroJones Aviation will support AeroJones Americas in the company’s exhibit at the new DeLand Sport Aviation Showcase to start later this week (November 3-4-5, 2016 at the KDED airport). AeroJones Americas will be easy for attendees to find with a premium location just inside the entrance to the event (spaces #1 and #2).

“AeroJones Aviation is pleased to bring renewed life to the very popular CTLS in America,” said Hsieh Chi-Tai, Executive Vice President at AeroJones. “We are pleased to work with our U.S. representatives at AeroJones Americas as we resume shipments of CTLS to America.”

Headquartered in Central Taiwan Science Park, AeroJones is now manufacturing the CT series models at a new facility in mainland China facility, then shipping the aircraft to the U.S. for final preparation and delivery. AeroJones Americas will receive the aircraft, assemble them from shipping containers and will deliver to American customers.

The acquisition by AeroJones includes the four-seater general aviation aircraft called C4 that Flight Design first flew in 2015. The model, which resembles an enlarged CT-series, capitalizes on the very effective design shape of the market-leading Light-Sport Aircraft while providing four seats in a high performance, fuel-efficient, and roomy aircraft. AeroJones Aviation will pursue FAA approval. Further information on C4 will be available in the months ahead.