JetBlue will bring its Airbus A321 aircraft – “BluesMobile,” the first Airbus airliner built in the United States, to EAA AirVenture Oshkosh 2016. The JetBlue aircraft will be a highlight of participation by Airbus at this year’s 64th annual Experimental Aircraft Association fly-in convention, taking place July 25-31 at Wittman Regional Airport in Oshkosh, Wisconsin.

“BluesMobile” was delivered to JetBlue in April after being completed in Airbus’ new U.S. Manufacturing Facility in Mobile, Alabama. It will be in Oshkosh on Tuesday, July 26, and on display along the AirVenture flightline. Attendees will be able to tour the aircraft and representatives from Airbus and JetBlue will be available to answer questions about the new American-made Airbus airliner. 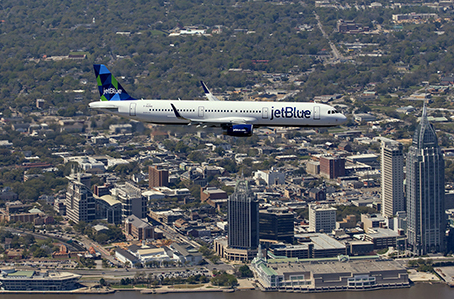 In addition to the appearance by the JetBlue A321, Airbus itself is increasing its participation at Oshkosh in 2016. It will have its own weeklong exhibit at AirVenture and is serving as presenting sponsor for the inaugural Founders’ Innovation Prize, a $25,000 competition which encourages and highlights aviation safety innovation.

“EAA AirVenture Oshkosh is all about innovation, and as Airbus moves to this production in America, this is a perfect place to show this new era for Airbus and JetBlue,” said Rick Larsen, EAA’s vice president of communities and member programs, who coordinates features and attractions at AirVenture. “It adds to AirVenture’s standing as a place where the world of aviation truly comes together, from huge airliners to the smallest ultralight, in a way unmatched anywhere else.”
The A321 made in the Airbus U.S. Manufacturing Facility in Mobile typically carries 185 customers. Airlines already have placed more than 1,200 A321 aircraft in service around the world.

“We’re looking forward to a fun and exciting day at Oshkosh sharing our BluesMobile aircraft with the EAA community,” said Captain Bart Roberts, Vice President Flight Operations, JetBlue. “Oshkosh celebrates flight and craftsmanship. BluesMobile is dedicated to the Airbus team for proudly bringing their manufacturing excellence to the U.S. We are honored to celebrate this new aircraft and our partners at Airbus at Oshkosh.”

“Oshkosh has its own unique place in the world of aviation, bringing together history, innovation, and fun,” said Barry Eccleston, President of Airbus Americas, Inc. “We’ve had a wonderful experience in our previous visits to AirVenture, so we want to share the Airbus story here … and bring a few surprises during the week as well.”