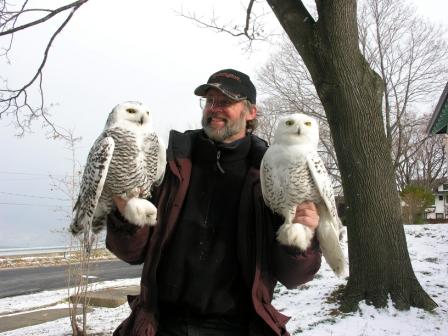 Over the past two weeks, the Port Authority of New York and New Jersey reports that five planes at JFK, Newark Liberty and LaGuardia airports have been struck by snowy owls. At least two snowy owls were shot and killed by airport employees in New York last week. News of the killings brought swift protests from local birdwatchers compelling the New York agency that manages the airports to instead work with the state’s environmental agency to capture and relocate the birds.

With the increased number of Snowy Owls being reported, Loomacres Wildlife Management wanted to share the following information about the owls from researcher Tom McDonald:

2013 is shaping up to be the largest irruption of snowy owls to the northeastern part of the United States in decades. Hundreds of owls have been reported along the eastern seaboard in or near the type of habitat they prefer. Examples of these areas would include wide open treeless countryside, (airports, farmland, etc.) as well as large watersheds that support an abundance of waterfowl. Most of these owls are only 4 to 5 months old and are still honing their hunting and social skills. Once a migrating snowy owl finds a suitable roosting/hunting area, it will invariably attract other migrating owls looking for the same.

Although they are beautiful birds we must keep in mind that they can be a significant hazard to aviation. Please be aware of the fact that these owls fly low to the ground when moving from perch to perch or actively hunting. Snowy owls have caused severe damage to aircraft. Even though snowy owls roost during the daylight hours, they will pursue prey (mice, meadow voles, rabbits, birds and waterfowl) at any given hour of the day if the opportunity arises. Dusk is a particularly concerning time of the day as they begin to compete for hunting territories and dominant birds will bully or chase other owls out of the most productive areas.

This chasing/hunting activity will continue well into the night time hours and will diminish soon after the sun rises. It is important for airport staff to aggressively harass the owls as soon as they are observed on the airport. Harassment is likely to be useful, as they do not respond well to pyrotechnics. Snowy owls can also be trapped and relocated to suitable habitat at least 30 miles from the airport. Snowy owls are protected by the Migratory Bird Treaty Act; a permit is needed to remove them when other mitigation efforts are unsuccessful.

Researcher Tom McDonald has spent decades studying snowy owls. As part of his study he live-traps owls to collect blood samples. If your airport is having an issue he may be able to assist with relocation efforts. He has successfully trapped and relocated snowy owls from several airports in the Northeast.

If you need assistance with snowy owls or have further questions please give us a call or email us at info@loomacres.com