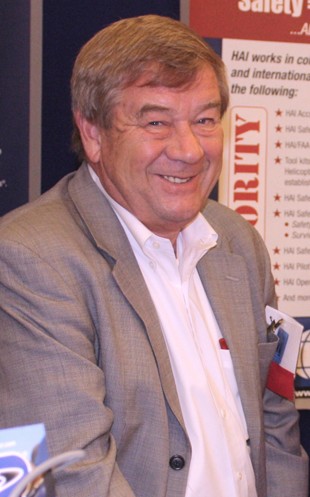 Hearing the word “helicopter” might bring to mind the early drawings done in the 1500s by brilliant, Italian inventor, Leonardo Da Vinci, which might be thought of as a forerunner to today’s rotorcraft. But, most aviators think of Russian-born Igor Sikorsky as the “father of helicopters” because he built the first successful models upon which all of our current types are based.
Helicopters and their highly-trained crews impact our lives daily. From emergency evacuations, fire fighting, and routine business transportation, these important flying machines are now an integral part of our aviation system. Recently, the Helicopter Association International-HAI, produced two DVDs to promote careers in the rotor-world and explain the importance of helicopters in our communities and lives.
Recently David York, Vice President of Regulations and International Affairs for HAI-Helicopter Association International, (shown right) shared two DVDs that HAI produced to promote careers and outreach. “Helicopters: A Day in the Life explores the world of helicopters at work. Even though it is only 22 minutes long, it documents the important tasks and daily services. Produced in 2008, community and aviation groups will find it interesting. Students and educational organizations will see the career opportunities. We feel it would be a good resource for public libraries, too.” David York narrated the DVD as well.
Newly released DVD, Spotlight on Women in Helicopter Aviation, features 30 minutes of cutting edge women of today’s rotorcraft industry. “This brand new DVD takes viewers into cockpits and hangars to hospitals and board rooms. HAI wanted to celebrate the bright future of women in helicopter aviation,” explained York. Learn more at http://www.rotor.com.
Since the 1970s, the military began to train women in their helicopters. The most recent statistics for female rated helicopter pilots indicate their numbers are growing significantly. HAI is trying to foster that growth with outreach to David York women pilots and females considering a new career.
HAI is also hosting Heli-Expo 2012 this coming February 11-14 in Dallas. Billed as the world’s largest trade show dedicated to the international helicopter community, 65 helicopters with be on display at the Dallas Convention Center. Also, over 20 educational programs and 600+ exhibitors will be part of this important aviation event. Learn more at www.rotor.com/heliexpo.
Attachment: