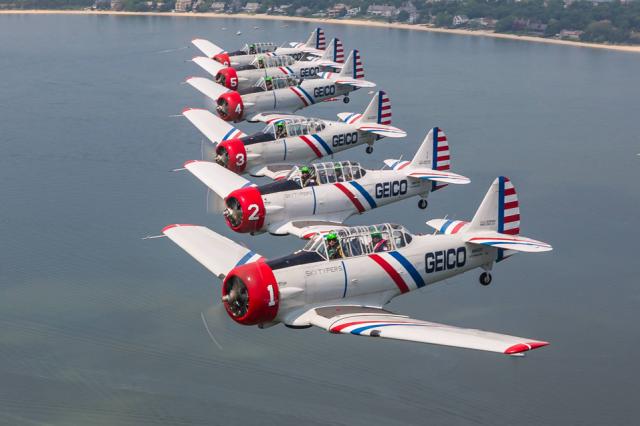 The Geico Skytypers, for the first time ever, added Millville, New Jersey to its upcoming air show schedule which features more than a dozen shows this season beginning this month. The SNJ warbirds take off from their Long Island, New York base to fly up and down the east coast between March and November.

“Our SNJs trained the pilots of the Greatest Generation,” said Steve Kapur, GEICO Skytypers pilot and team marketing director. “We consider it a privilege to inspire kids, honor veterans and fly these warbirds on behalf of our sponsor GEICO at air shows all across the U.S.”

The Geico Skytypers’ 2015 schedule shares the skies eight times with the U.S. Navy Blue Angles and four times with the Air Force Thunderbirds. Additionally, three of their stops will feature an air vs. sea race between the pilots and a water-bound counterpart, the Miss Geico offshore racing team. Stops for the air vs. sea race include Jones Beach, New York, Atlantic City, New Jersey and Jacksonville Beach, Florida.

“We know our sister speedboat team is the eight-time world champion,” said Larry Arken, Commanding Officer and GEICO Skytypers Flight Lead. “But one of our pilots, Tom Daly has his own world speed record at Bonneville Salt Flats, Utah and he never likes to come in second – even when he’s racing in a 75-year-old warbird.”