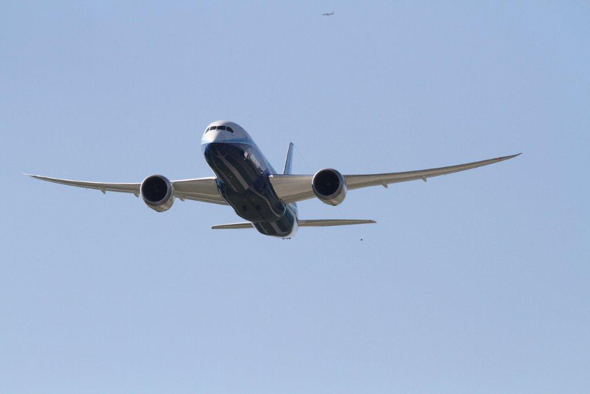 Just weeks after Boeing made the 787 Dreamliner available to the public for the first time at EAA’s 2011 AirVenture, the Federal Aviation Administration (FAA) Administrator Randy Babbitt announced that the FAA has approved production of the new aircraft.  (Photo by Chris Bildilli)

At an event at Boeing’s facility in Everett, Washington, Administrator Babbitt presented Boeing executives with two certificates for the design and production of the Boeing 787 Dreamliner with Rolls-Royce engines. The first, a Type Certificate, is for the FAA’s approval of the airplane’s design. The second, a Production Certificate, allows Boeing to manufacture the 787 following a rigorous review by FAA inspectors of Boeing’s quality system, production tooling, manufacturing processes and controls, inspection methods, and supplier control procedures.

U.S. Transportation Secretary Ray LaHood said the Boeing 787 Dreamliner is an incredible technological achievement – one that sets a new standard for innovation. The new engine technology is fuel-efficient and reduces noise, minimizing the impact on the environment. The Secretary said those are key to meeting their NextGen goals.

According to Babbitt, this achievement could not have been possible without the professionalism and dedication of the FAA team involved in the certification. Babbitt said the engineers, inspectors and flight test pilots all worked diligently to ensure that their high safety standards were met.

Boeing made its initial application to the FAA on March 28, 2003 and the program was launched in April 2004. The first 787 rollout ceremony was on July 8, 2007 at Boeing’s Everett assembly factory. The airplane first flew on Dec. 15, 2009, and the six flight test airplanes have since accumulated more than 4,645 flight hours, with approximately 25 percent of those hours flown by FAA flight test crews. More than 200,000 hours were logged by FAA technical experts who were involved in the type certification of the 787.
The Boeing 787 is a medium-size commercial transport airplane. It’s the world’s first major airliner to use composite materials for most of its construction, more than 50 percent by weight. The airplane will use 20 percent less fuel and produce less noise compared to similarly sized airplanes. It was designed and manufactured by suppliers and partners around the world and integrated at final assembly. The 787 incorporates many capabilities of the nation’s Next Generation Air Transportation System, or NextGen.

The European Safety Agency (EASA) also issued a same day validation of the FAA Type Certificate of the 787.