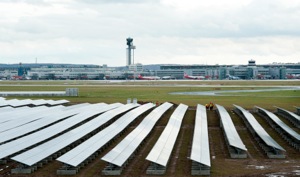 Travelers flying in or out of Dusseldorf International (DUS) can enjoy a new sight: a field of 8,400 solar panels on an area as big as six soccer fields.  The installation is complete, and solar energy production is scheduled to begin before the end of the year.  The plant will generate two megawatts of sustainable energy per year, enough for 600 four-people households in Düsseldorf. A large monitor in the airport’s departure hall will display actual figures of energy generated and carbon dioxide saved.

Production of the plant – which is the largest ground-mounted system within the security zone of a German airport – started in October and was completed after only eight weeks, due to unseasonably warm weather in the area.  The plant is a joint project of Düsseldorf International and a subsidiary of the city’s public services, Grünwerke GmbH, in an effort to rapidly increase the use of sources for local and renewable energy.
Düsseldorf’s mayor, Dirk Elbers said a PV plant of this magnitude within the safety parameters of one of the country’s largest passenger airports reflects a new way of thinking about renewable energies.
Christoph Blume, CEO of DUS, said  that generating energy in a way that is environmentally sound is a priority for Düsseldorf International and they are very excited about working on this future-oriented project with their city’s public services.  Solar energy is not the only source of renewable energy at DUS.  Blume said they also employ combined heat and power technology in a block heating station, and keep carbon dioxide emissions even lower this way.
For more information on Düsseldorf International Airport, visit www.fly2dus.com.
Attachment: