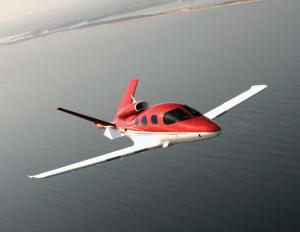 Cirrus Aircraft has announced that its Cirrus Vision SF50 personal jet program is fully funded through certification and initial production and projects first customer delivery to take place in 2015.

The Cirrus Vision creates a new category in personal aviation – it is the first aircraft of its kind to fill the gap between high performance pistons and traditional turboprop twins and light business jets. The Vision will offer the same class-leading innovation, technology and style hallmarks that Cirrus is known for in its best-selling SR20, SR22 and SR22T family of single engine piston aircraft. Seating up to five adults and two children in an expansive cabin that sets a new standard in luxury and flexibility for pilots and passengers, the Vision is designed for performance, affordability and safety.
Dale Klapmeier, CEO and Co-founder of Cirrus Aircraft said that this is simply a tremendous milestone for Cirrus. Kapmeier said they revolutionized general aviation with the introduction of the SR20 just over a decade ago. More than 5,100 SR-series aircraft delivered to date.
The first flight of the Vision concept aircraft was in 2008. Detail design, systems verification and full flight envelope testing have been ongoing since that time. Today’s investment, however, significantly increases the pace and momentum of the program and allows the company to bring the jet to the market. In an effort to ramp up to certification and production, Cirrus Aircraft will accelerate hiring of engineers, designers and other related technical disciplines critical to the completion of the program.
The Cirrus Vision development team, working with global design and vendor partners, is based at Cirrus Aircraft company headquarters in Duluth, Minn., and Vision jets will be assembled right alongside the SR20, SR22 and SR22T in the same Minnesota and North Dakota Cirrus Aircraft production facilities. Garmin (avionics and flight deck), Williams International (turbofan engine) and Triumph Group (trailing link landing gear) are just three of the strongest brands in aerospace that are members of the Vision supplier team.
Through June 30, 2012, the list price for a well-equipped Cirrus Vision SF50 is $1.72 million with list price moving to $1.96 million effective July 1, 2012.
For more information visit www.cirrusaircraft.com .
Attachment: