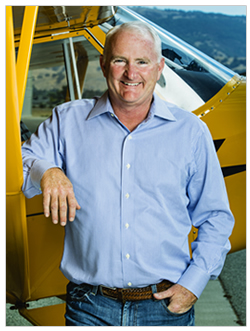 Mark R. Baker, a longtime general aviation (GA) pilot, has been named president and chief executive officer (CEO) of the Aircraft Owners and Pilots Association (AOPA). Baker is only the fifth AOPA president since the association’s founding nearly 75 years ago and will take office on September 6, 2013, following formal appointment by the Board of Trustees at the Annual Meeting of Members in Frederick, Maryland.

“We are pleased to announce that Mark Baker has been selected as the next president and chief executive officer of AOPA,” said Bill Trimble, chairman of the AOPA Board of Trustees. “He has all the tools this job demands. Mark brings 35 years of involvement in the GA community as a pilot and decades of experience in leadership positions in the home improvement industry, such as Scotts Miracle-Gro Company and The Home Depot. He has an extraordinary understanding of the importance of serving our membership and advancing their needs. He is well-suited to build on the foundation established by his predecessors and move AOPA forward.”

A native Minnesotan, Baker, 55, became a pilot in his twenties and has logged more than 7,500 hours of flight time. The pilot community and his close flying friends are the reason he can be found at an airport or a seaplane base nearly every weekend. An aircraft owner, Baker enjoys flying everything from light seaplanes to turbines to helicopters, but his favorite airplane continues to be his Piper Super Cub. Baker and his wife, Vickie, have four children and six grandchildren. Not only did he encourage his father to learn to fly, but two of his sons-in-law have their pilot’s certificates and his own son will become a pilot soon as well.

“Being selected as only the fifth leader of AOPA is a tremendous honor,” said Baker, an AOPA member since 1987. “Many of my happiest moments have been spent flying and sharing my passion for aviation with others. I am committed to the priorities of the membership and will ensure that AOPA’s focus remains on carrying out our mission of protecting the freedom to fly.

“I am very much looking forward to getting out and meeting and listening to the members, and then using the feedback to focus valuable resources where they will most benefit GA pilots and increase the value of membership.  I believe this approach can also be useful in increasing member participation in AOPA and driving increased GA flight activity.”

Trimble thanked outgoing president Craig Fuller for his efforts. “On behalf of the Board of Trustees, I want to thank Craig Fuller for his five years in the left seat at AOPA. He served as a formidable advocate on behalf of the general aviation community, helped to forge partnerships with other aviation associations and provided important guidance at a challenging moment in our history. We wish him well as he moves on to the next stage of his distinguished career,” said Trimble, who has led AOPA’s Board since 2005.

The AOPA Board of Trustees’ search committee began looking for AOPA’s new leader earlier this year, after Fuller informed the Board of his intent to move on to other opportunities. The Board retained the national search firm of Heidrick & Struggles to help identify final candidates from among the association’s nearly 400,000 members, and Baker emerged as an outstanding candidate for the position.

Through the years, Baker worked his way up through the home improvement business and brings a sharp focus on customer service that will translate well to a membership association. Most recently, he served as CEO of Orchard Supply Hardware Stores Corporation, a leading retailer of home improvement and garden products. Baker also served in senior executive roles at Scotts Miracle-Gro Company, Gander Mountain Company and The Home Depot. Earlier in his career, he also worked for HomeBase, Scotty’s Home Improvement Centers and Knox Hardware and Lumber. He is an alumnus of the University of Minnesota.

Baker enjoys flying Young Eagles, youths aged 8-17 who are interested in aviation and are given the opportunity to fly in GA aircraft, and has donated time and resources in the past to other Experimental Aircraft Association initiatives. He also has served on several corporate boards and has been involved in leadership roles with nonprofit organizations including City of Hope, a leading biomedical research, treatment and education institution in Duarte, California, which he has supported since the 1980s.

With this appointment, Baker also will become chairman of AOPA’s Political Action Committee, chief executive officer of the AOPA Foundation and publisher of AOPA Pilot, the world’s largest and most influential aviation publication.