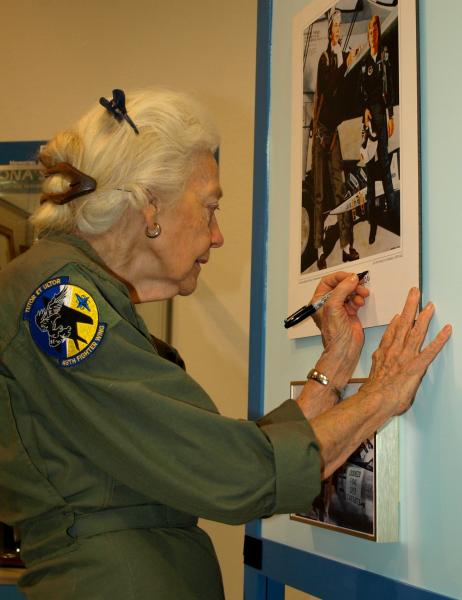 Successful women from several generations were featured speakers at the 3rd Annual Wings to Fly program April 11th, sponsored by the Aeronautics Division of the Arizona Department of Transportation. The event, held at the Arizona Wing Commemorative Air Force Museum at Falcon Field in Mesa, Arizona, encourages girls to pursue careers in aviation and aerospace.

Participants had the opportunity to hear from a variety of women aviators including Betty Blake, a former WASP pilot; Commander Patricia Beckman, US Navy (Ret) currently with Boeing Commercial Airplanes Group; and Jessica Cox, the inspirational young lady who earned her light sport pilot certificate by overcoming her disability of being born without arms.

Blake, call sign "Tack" learned to fly at age 14 in Hawaii where she experienced the attack on Pearl Harbor. As a member of the Women’s Airforce Service Pilots, she delivered P-51 Mustangs from the factories in Long Beach, CA to Newark, NJ three times a week and ferried over 36 different types of aircraft, including heavy bombers to support the war effort.

Cox, who is pursuing a career as an international motivational speaker, is the first woman pilot in aviation history to fly with her feet!

Betty Blake, top right, autographs a poster which is part of a new display at the CAF museum honoring women in aviation. Below is Blake with Patricia Beckman. Jessica Cox, lower right, addresses attendees. Photos curtesy of the Arizona Department of Transportation Aeronautics Division.