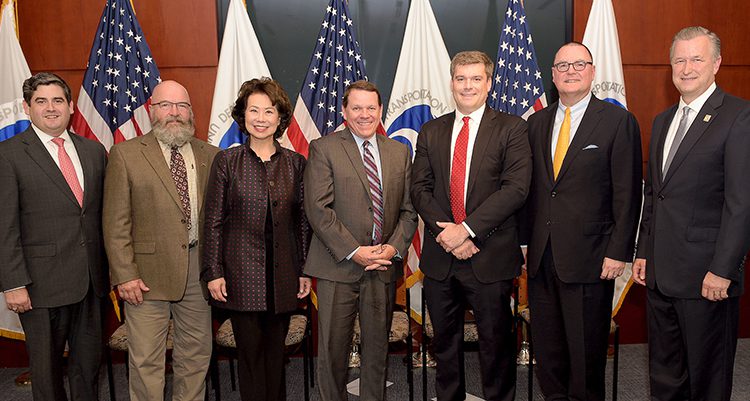 U.S. Department of Transportation Secretary Elaine L. Chao recently announced that the FAA has awarded $205 million in supplemental funding for infrastructure grants to small airports in 34 states. More than half of these airports serve rural communities and mostly general aviation. This funding is in addition to the $3.31 billion already awarded in regular Airport Improvement Program (AIP) funding during fiscal year 2018.

John Shea, Interim President and CEO of the National Association of State Aviation Officials (NASAO), was on hand with Secretary Chao and others representing the states and small airports.  “I’d like to congratulate the Department on awarding the first round of grants from this unprecedented discretionary funding to so many worthy projects,” said Shea. “I would be remiss if I didn’t thank Congress for recognizing the needs of our nation’s small and rural airports by appropriating these funds.”

The $205 million in Airport Improvement Program grants, according to Chao, directly addresses the need for improved aviation infrastructure – especially in rural communities. This first increment of supplemental funding provides grants to projects at 37 airports. These projects include runway reconstruction and rehabilitation, and the maintenance of taxiways, aprons, and terminals. The construction and equipment supported by this funding increases the airports’ safety, capacity and related issues. These improvements could support further potential growth and development within each airport’s region.

Shea said these airports are the lifeblood of transportation for many of the country’s smallest communities, for local businesses and farmers, and they serve as the inspiration for many who aspire to become our nation’s future pilots. “Just recently, in the wake of Hurricane Florence, GA pilots joined forces with local civil groups in North Carolina and formed Operation Airdrop as part of the disaster relief efforts,” said Shea. “Over 280,000 pounds of relief supplies were delivered to  communities in need.”

General aviation airports located throughout south-eastern North Carolina were the lifelines to the people most impacted by this event, and according to Shea, these areas were simply unreachable by any other transportation means. “Moving forward, our membership – the states’ aviation and transportation agencies – are always willing and able to help,” said Shea.

Congress provided the supplemental funding through the Consolidated Appropriations Act, 2018. The FAA published a Federal Register notice on July 9, 2018, which explained the statutory rules, evaluation criteria, and the submission process. The remainder of the $1 billion will be awarded during fiscal years 2019 and 2020, based on requests submitted by October 31.

Under the Secretary’s leadership, the FAA is administering the supplemental program in coordination with the regular annual AIP grant program to strengthen the safety and efficiency of America’s airports. U.S. infrastructure, especially its 3,300 airports increases the country’s competitiveness and improves the traveling public’s quality of life. According to the FAA’s most recent economic analysis, U.S. civil aviation accounts for $1.6 trillion in total economic activity and supports nearly 11 million jobs.

The statute’s requirements include:

Requiring the FAA to give “Priority Consideration” to specific airports (smaller and more rural airports;

For grants awarded to non-primary airports, the funds will cover 100 percent of eligible costs (so these airports do not have to provide a local match); and

The FAA administering the program over fiscal years 2018 to 2020.

In the March 2018 omnibus funding bill, Congress provided historic levels of funding for infrastructure investments across America. Following the increase in funding this fiscal year, the Department will invest $10 billion in new transportation infrastructure. The Department is committed to rebalancing investment in historically-neglected rural America.

Shea said he just spent several days with the nation’s state aviation directors at their annual conference, and once again was inspired by their dedication to the most basic of our airports. “When they heard that I would be joining you all here today, they asked me to share a message with you,” said Shea. “They stand ready to be your and local governments partners in building the safest and most efficient air transportation system in the world and are dedicated to this critical partnership to ensure that our airports meet the needs of our nation.”

The list of grants, including the supplemental and regular AIP grant awards, is here: https://www.faa.gov/airports/aip/aip_supplemental_appropriation/