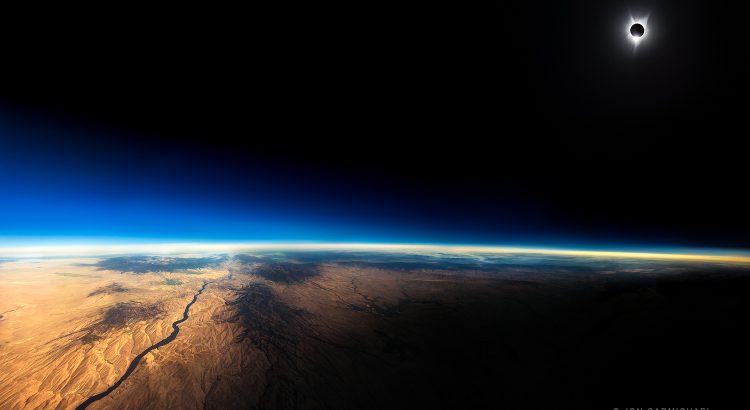 One year ago today millions of people watched in awe of the Great American Eclipse. For the first time in 99 years, the moon’s shadow raced across the U.S. becoming the most-observed and photographed moment in history. An estimated 215 million Americans tuned in for the event, breaking NASA’s online viewing records by 7 times. Today, photographer Jon Carmichael commemorates the first anniversary with the official unveiling of his never before seen image at Twitter’s New York office.

Twitter’s CEO Jack Dorsey said of the image:  “I was immediately struck by Jon’s photo. But, like most things, the story behind it was awe-inspiring. So excited for the world to hear it, and be reminded of that moment we were all looking at the sky together.”

“The last time we had a connection to the heavens like this was during man’s first flight to the moon, on Apollo 8 in 1968, said Mr Carmichael.  “The first, famous Earthrise photo came from that mission, and like the eclipse last year, showed us that we are all a part of something bigger. I wanted my photo to perfectly capture this moment.”

Carter Emmart, Director of Astrovisualization of the Rose Center for Earth and Space and the American Museum of Natural History notes:  “When I saw Jon’s amazing work, under the moon’s shadow, it is evident that you can see how thin our planet’s atmosphere really is, and how close we are to space. This is by far one of the best eclipse photos I have ever seen. In Jon’s photograph, one gets the linkage to space, with greater landscape detail than we get from Earth’s orbit. His image is a ladder to space.”

To capture this rare image, Mr Carmichael mapped out the commercial flight paths around the U.S. and compared them to the moon’s path of totality and determined that Southwest Airlines flight #1368, from Portland, OR to St. Louis, MO, would be his best chance.

He introduced himself to the Southwest flight crew, who gave him seat 1A and did whatever they could to assist, from the Captain personally cleaning his window, to performing a series of five 180-degree turns while under the moon’s shadow to get the shots he desired.

“I was terrified,” Mr Carmichael said. “I worried I would miss this once-in-a-lifetime moment.” Carmichael arrived at the gate armed with all his camera gear and $600 cash. “My biggest fear was not getting a window seat since Southwest doesn’t have assigned seating.”

“At Southwest, we aim to connect Customers to the moments that matter most in their lives.  As soon as our Flight Crew learned Jon’s story, they jumped into action to assist him in capturing the photo of a lifetime,” said Michelle Agnew, Southwest Spokesperson. “We’re proud of our Employees for going above and beyond in making this a moment to remember for our Customer.”