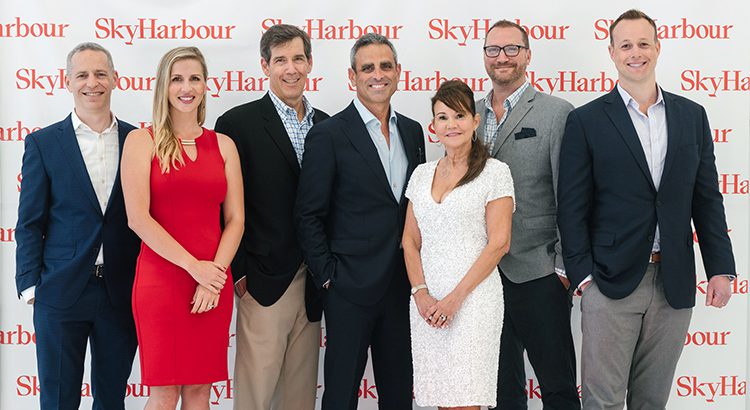 Sky Harbour LLC (“SHG”), a developer of private aviation infrastructure focused on building, leasing and managing business aviation hangars, today announced it has entered into a business combination agreement with Yellowstone Acquisition Company (NASDAQ: YSAC, YSACU and YSACW) (“Yellowstone”), a publicly traded special purpose acquisition company sponsored by Boston Omaha Corporation (NASDAQ:BOMN) (“Boston Omaha”). Upon closing of the business combination, SHG will become a publicly traded company, and it is expected that its common stock will be listed on the NASDAQ exchange. Tal Keinan, Chairman and Chief Executive Officer of SHG, will continue to lead the business post-transaction. The combined company will have an implied pro forma equity market value of approximately $777 million at closing.

Sky Harbour addresses the general and pervasive deficit in business aviation hangar infrastructure across much of the United States. The company develops campuses of business aviation hangars, leases them to corporate, private and government flight departments on a long-term basis, and manages the campuses, providing essential services to its tenants.

Boston Omaha, through one of its subsidiaries, has agreed to provide $55 million of financing in support of the transaction, which will be funded prior to the closing of the business combination, assuming SHG successfully raises at least $80 million in a private activity bond offering. This additional equity investment will initially be directly into SHG, and upon the successful consummation of the business combination will convert into 5,500,000 shares of the post-combination public company’s Class A common stock, at a price of $10 per share. In the event the business combination is not consummated, Boston Omaha’s investment will remain as Series B Preferred units of SHG. In addition, the parties will seek to raise additional funding to support the business combination through a private placement investment (“PIPE”) to be consummated at the closing of the transaction of $100 million. In addition to the $138 million raised in Yellowstone’s initial public offering and held in trust and the $55 million financing, Boston Omaha has agreed to provide to SHG a backstop valued at up to an additional $45 million through the purchase of additional shares of Yellowstone Class A common stock at a price of $10 per share if needed to meet the minimum investment condition of $150 million in cash and securities to SHG at the closing.

“Sky Harbour is pleased to be entering into this partnership with Yellowstone and the Boston Omaha team to capitalize on the strategic progress the company has made in the last twelve months. Adam Peterson’s and Alex Rozek’s experience in the infrastructure space, together with the funding provided by this transaction, will help the company to meet the demand for its offering across the country and achieve its growth objectives,” said Mr. Keinan, SHG’s CEO.

“Boston Omaha’s largest business interests align behind building American infrastructure. We are attracted to the exceedingly high barriers to entry for additional, valuable hangar supply at key airports, all while being financed in an advantaged low-cost way. We believe Tal has built a best-in-class financial and operational team, creating considerable strategic value in the time we have known them. The team has refined a competitive business model that can scale and we are excited to partner with Sky Harbour,” said Adam Peterson and Alex Rozek, Co-Chairpersons and Co-CEOs of Boston Omaha and Yellowstone.

approximately 58% percent of the issued and outstanding shares of common stock immediately following the closing of the business combination.

The combined company expects to receive up to $238 million in gross proceeds, assuming no redemptions of Yellowstone’s existing public stockholders. This figure excludes additional funds which may be raised in the PIPE. All SHG equityholders are retaining 100% of their equity in the combined company. The cash proceeds are expected to be used to fund the completion of four initial airport hangar campuses in addition to expansion at SHG’s location currently in operations.

The transaction has been unanimously approved by the Yellowstone Board of Directors, as well as the Board of Managers and all equityholders of SHG, and is subject to the satisfaction of customary closing conditions, including the approval of the shareholders of Yellowstone and the receipt by SHG of at least $80 million in a private activity bond financing currently expected to close in September. The combined $100 million investment and commitment to backstop by Boston Omaha was approved unanimously by the Board of Directors of Boston Omaha.

Additional information about the proposed business combination, including a copy of the equity purchase agreement and investor presentation, will be provided in a Current Report on Form 8-K to be filed by Yellowstone with the Securities and Exchange Commission and available at www.sec.gov. The investor presentation can also be found on Sky Harbour’s website at www.skyharbour.group.