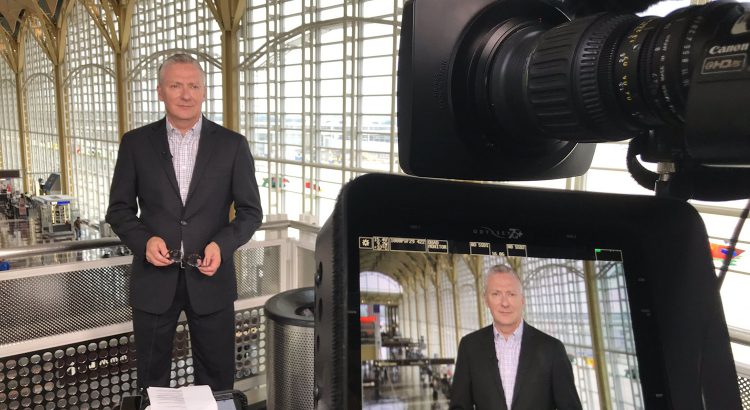 Veteran NBC News Correspondent Tom Costello was awarded the prestigious NATCA James Oberstar Sentinel of Safety Award on Wednesday, during the Association’s Communicating For Safety Conference held in Las Vegas. The award honors members of the aviation community that have displayed outstanding achievement in the advancement of aviation safety. This is the first time a member of the news media has received the award.

Costello’s interest in aviation has developed through the years.  It began when he was a reporter at KUSA-TV in Denver, covering the crash of United 232 in Sioux City, IA. “I found the NTSB’s deep-dive into the plane’s manufacturing history to be fascinating,” said Costello.  “The investigators were meticulous in their work and managed to zero in on the timeline for when the tail engine’s fan disk came off the assembly line and how a metal fatigue crack caused the disk to disintegrate in flight.  That exploding disk then took out flight 232’s hydraulics and forced an emergency landing.”  Costello considers Captain Al Haynes, who managed to save 185 lives on that day, the hero of that incident. “One of the great moments of my career was meeting Capt. Haynes, 23 years later.”

Other serious incidents or crashes covered by Costello include United 585 in Colorado Springs, the Colgan Air crash in Buffalo, the Miracle on the Hudson water landing, the Comair 5191 crash in Kentucky, Asiana 214 in San Francisco and more recently the twin 737-Max crashes overseas.

Costello, who is based in Washington D.C., says he has also enjoyed covering the business of aviation and seeing first-hand the manufacturing process at Boeing and Airbus and taking classes at both companies.  “The airline industry has been a fascinating topic to cover ever since 9/11, as it struggled to recover,” said Costello. “It then went through cataclysmic mergers and came out stronger on the other end.” Costello feels it’s an industry that nearly every American feels they have a very close, personal connection to because they entrust their lives and the lives of their families to these companies every time they fly.  “So, we find there is usually great audience interest in the aviation stories we cover on NBC.”

The knowledge gained and exposure to the aviation industry that Costello has experienced over the years has seeped into his personal life as well. “I find I am often the one who is reassuring friends and colleagues that flying is truly the safest way to travel,” said Costello. “Every day, more than 2 million Americans board a flight. Thankfully, serious incidents are very rare these days.”  Costello says the engineering expertise and the culture of safety at the nation’s major airlines are firmly cemented into the minutiae of how they do business.  When there is a serious incident, Costello says it’s usually the result of human error at some level.  “But as I’ve gone behind the scenes with airlines and manufacturers, I’m always impressed with how robust the system is, designed to ensure a mistake doesn’t get through.”

Costello believes the ongoing 737-MAX investigation is already having a profound impact on Boeing and the airlines that fly it. “Never in the history of aviation has the FAA grounded a plane for so long,” says Costello. “But, the incident has also exposed alleged deficiencies in how the FAA oversees the manufacturing process and approves planes to fly.”  Now, the world’s aviation regulators are saying they will not automatically follow the FAA’s lead on recertifying the MAX for flight, which Costello believes is a serious loss of confidence in what has been one of America’s most-trusted government entities.  “Of course, Boeing has also suffered a serious loss of confidence after two crashes and 346 deaths,” continued Costello. “Boeing is under tremendous pressure, to not only fix the problem, but to design planes for pilots in countries that may not have the expertise and training of pilots in the U.S. or Europe.” The result – Costello believes these horrific crashes in Indonesia and Ethiopia could likely result in significant changes at both the manufacturing and regulatory levels.

On another note shared with the State Aviation Journal, Costello believes the government shutdown in early 2019 had a profound impact on the men and women who rely on government pay checks.  “These are people who perform the tough jobs that the country depends on every hour of the day; whether it’s air traffic controllers, TSA officers, FBI agents, NASA Mission Controllers, food inspectors, the list is endless.”  Costello says the political calculation to shut down the government puts these people into extreme hardship during the coldest weeks of the year.  “Many turned to food banks for help.  It was only when air traffic controllers began calling in sick, forcing air traffic to slow to a trickle, that the president reopened the government,” said Costello. “If there’s ever another government shutdown in the future, those men and women may be far less patient and far less willing to work for free.”