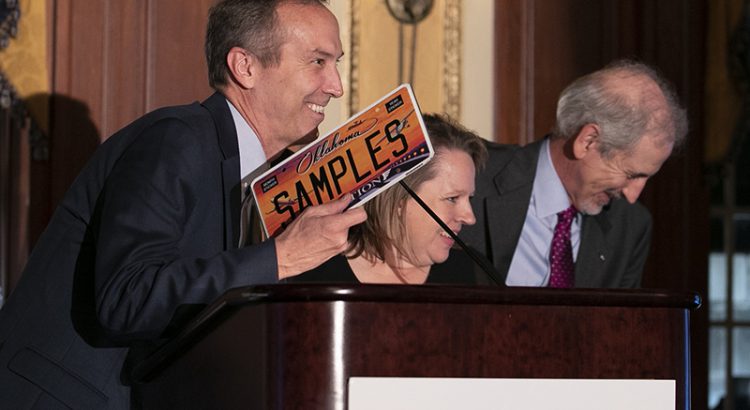 Each year the National Association of State Aviation Officials (NASAO) awards special recognition to state aviation programs and the officials who have unselfishly dedicated much of their careers to the industry in their state and often times, on the national level.

Topping the list of awards this year was the prestigious Kenneth Rowe Ambassador of Aviation Award, which was presented to Victor Bird, Director of the Oklahoma Aeronautics Commission.

“To be recognized by your peers with this award is most humbling,” said Bird, who praised his staff for their capabilities. Along with being singled out by NASAO, Bird received praise from Oklahoma Governor Mary Fallin, Senator Jim Inhofe and Congressman Steve Russell. Bird has been the director of the Oklahoma Aeronautics Commission since 2002.

Cliff Burnette, Director of the Airport Services Division of the Virginia Department of Aviation (DOAV), received the NASAO State Aviation Distinguished Service Award, which honors state aviation personnel who have excelled in their service and dedication to aviation progress and development in their state.

“I am humbled to be recognized for my work by an organization that does so much for developing and promoting airports at the state level,” said Burnette. “I look forward to working with the NASAO leadership to advance the organization’s mission leading to a better and stronger national air transportation system.”

Burnette is in his 41st year as an employee of the Virginia Department of Aviation and has amassed a track record few in government service can emulate.

The Most Innovative State Program award was presented to the Alaska Department of Transportation & Public Facilities for their work in producing “The Monster Below.” Airfield electrician Dennis Deering and Safety Officer Sam Baldessari, both employed at the Ted Stevens Anchorage International Airport, created a video about Airport Lighting Systems basic operations and safety.  “The Monster Below” educates airport operators and managers about the dangers and hazards of the airfield lighting systems.

The video was designed as a training tool for Anchorage airport staff and was presented industry-wide at the State of Alaska’s Airport Training Conference.  The most important impact of this video is its direct potential to save lives and minimize the loss of property during an emergency, by improving the training of airfield operators and personnel.

The North Dakota Aeronautics Commission received the NASAO Center Aviation Education Program Award for its Flight Training Assistance Program (FTAP), which provides assistance to rural airports which do not have a flight instructor locally available. The program funds 75% of the expenses associated with transportation, to bring a flight instructor to an airport.

The additional costs are paid by the local airport. The intent of this program is to allow students access to flight instruction at their local airport without having to incur additional expenses. The FTAP program was created in response to the pilot shortage and has a benefit of increasing operations at rural airports.

The program has measured success by seeing an increase in number of pilots, based aircraft operations and fuel sales at participating sites. One such success story is in a very small town; after the airport began participating in the program, a student who likely would not have driven to another airport for instruction, began flight instruction and continued all the way to a certified flight instructor. After she became a CFI, the airport no longer needed to participate in the program and now has a local instructor. This instructor is now aiding other rural airports in her area.

The President’s Award was presented to Dr. Jeffrey DeCarlo, Administrator with the Massachusetts Department of Transportation Aeronautics Division for his outstanding work for the Association in the areas of training and aviation education.

The Chairman’s Award was presented to Brad Brandt, Aviation Division Director for the Louisiana Department of Transportation & Development. Ronnie Mitchell, the NASAO Chairman during the 2017/18 fiscal year, presented the award to Brandt for his strong leadership in state aviation. “During his tenure as Chairman, Brad worked closely with the President and CEO of NASAO to ensure legislation was crafted at the national level,” said Mitchell. “A strong advocate for aviation, his leadership has been outstanding and without equal during the time I have known him.”