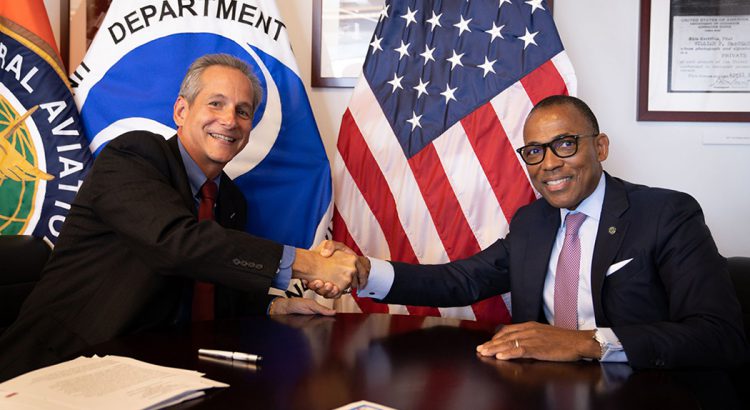 In signing on behalf of NASAO, Chair Anthony McCloskey, noted that the MOU on Aviation and Space Education (AVSED) closely tracks with the key priority of his term as Chair, encouraging NASAO’s role in this area through revitalizing the NASAO Center for Aviation Education and Research. McCloskey said, “NASAO and its state agency members welcome the FAA’s willingness to recommit to this joint effort to promote aviation education as a path to rewarding and important careers. Engaging young people in aviation is critical to the future of the industry and America’s leadership in aeronautics.”

Greg Pecoraro, NASAO’s President and CEO, observed that NASAO’s strong partnership with the FAA and its predecessor agencies has led to the safest aviation system in the world. Pecoraro said, “Regularly renewing this partnership is critical, especially as we look forward to exciting new advances in aeronautical technologies that will revolutionize the industry and how people access aviation”.

Nolen and McCloskey renewed MOUs on a Cooperative Agreement between FAA and NASAO, AVSED and Runway Safety. The AVSED MOU commits the FAA and state agencies to continue working together to provide, promote, and collaborate on AVSED Outreach activities across the country. The MOU on Runway Safety provides for the FAA and states to work collaboratively to provide and disseminate information on runway safety to reduce both incursion and excursion events at airports.

They also signed an updated MOU on Uncrewed Aircraft Systems (UAS) to include cooperation on Advanced Air Mobility (AAM) activities. In the updated MOU, the agencies agreed to work collaboratively to safely integrate UAS and AAM activities into the National Airspace System and develop a framework for cooperation and collaboration. A particular focus will be on providing educational outreach and subject matter expertise to the aviation community regarding UAS and AAM operations, regulations and related issues.

Although state aviation agencies have worked closely with a succession of federal aviation agencies since Congress enacted the Air Commerce Act in 1926, the first formal agreement came in 1996 with the signing of an MOU by FAA Administrator, David Hinson, which has been periodically renewed since that time.