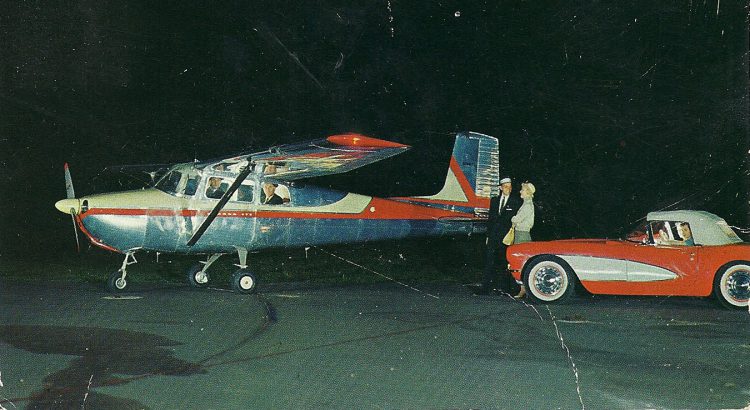 In the late 50’s Cessna and their nationwide network of dealers did a great job marketing the company’s  new C-172 by mailing out postcards to prospective students and owners.

My mom, a number of years back, presented me with a stack of old post cards she had been saving, including the one shown with this article. The shiny C-172 pictured with a first generation Corvette certainly caught my eye today as I’m sure it must have for anyone who saw it back in the day.

This particular post card was addressed to my dad, Sam Stevens, and came from Clinch Flying Service, a Cessna dealer, located at the Municipal Airport in North Platte, Nebraska. It was postmarked April 10, 1957 and was a reminder that ground school class would be held on the following Saturday at 10:00 A.M.  The back of the post card reads – Take a “drive” in the sky in this amazing new airplane, the Cessna 172 with patented “Land-O-Matic” landing gear. It makes “flying like driving!” See and fly one at your nearest Cessna Dealer today.

My dad got to fly the 172 on many cross countries back then. He got his Private license in Tulsa Oklahoma in the mid fifties on the G.I. Bill and then his Commercial with Clinch in North Platte. “I loved that plane,” he said. “I had to drive the 44 miles to the airport for each lesson since I lived in Cozad at the time.”

Clinch Flying Service was started in 1938 by John Clinch a native of Norfolk, Nebraska when the airfield was a fenced pasture. Clinch, considered the “father of North Platte aviation,” started the Clinch Flying Service. For thirteen years he also managed the North Platte airport, which has become a modern municipal airport. Clinch assisted in the development of the Nebraska Department of Aeronautics and

My father recalled that a rather experienced kid they had working for them some, conducted the ground school which took place about once a month.  He said that after a few minutes of talk, they played poker the rest of the night. “I’m sure the Clinch Flying Service was unaware of this happening,” he said. “I always lost what money I had.”

Eventually, my father chose music as a career rather than aviation, but I am grateful that he shared his love of flying with me. He also helped me finance my commercial license and instrument ticket. I’m glad I had the opportunity to take him up with me a couple of times to demonstrate the accomplishment that he had invested in, but more importantly to share in the joy that we shared as father and son.