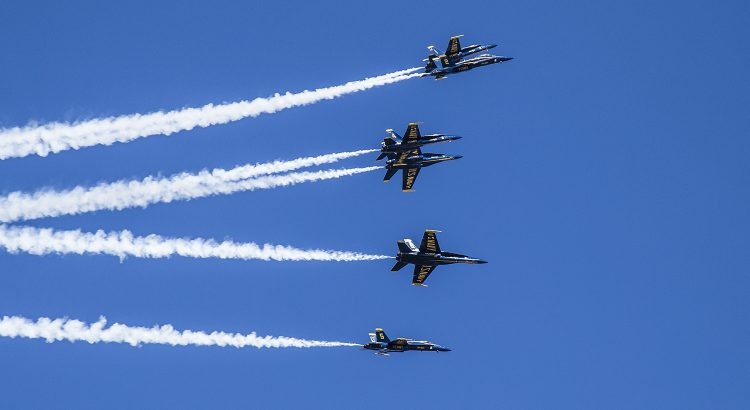 Six former team commanders of the U.S. Air Force Thunderbirds and U.S. Navy Blue Angels are forcefully opposing legislation that would privatize U.S. air traffic control services. In a 100-second video produced by the International Council of Air Shows, these former military aviators urge their fellow citizens to contact their congressional representatives to tell them to vote against H.R. 2997 which is currently being considered by the U.S. House of Representatives.

“We are concerned about recently proposed legislation that would turn over America’s air traffic control to a private organization that would be controlled by the airlines and their allies,” says Major General Brian Bishop (U.S. Air Force, Retired), who flew in the lead position for the U.S. Air Force Thunderbirds in 1998 and 1999.

“We know first-hand that the air traffic control system in our country is the safest, largest, most diverse and most efficient in the world,” says Captain Steve Foley (U.S. Navy, Retired), who was the commanding officer of the U.S. Navy Blue Angels in 2005 and 2006.

In the video, the six former U.S. military senior officers –Bishop, Foley, George Dom, Ron Mumm, Greg McWherter, and Richard McSpadden – provide details on what the proposed legislation will and will not accomplish.

“This legislation will not reduce the vast majority of delays caused by bad weather and the airlines themselves,” said Dom, a retired Navy captain who was team lead of the Blue Angels in 1997 and 1998.

“It will not enhance safety, reduce fares or accelerate modernization,” adds Mumm, a retired Air Force lieutenant colonel who led the U.S. Air Force Thunderbirds in 1996 and 1997.

“But it will add billions to our Nation’s budget deficit, negatively impact our national security, and needlessly complicate border protection,” says McWherter, also a retired Navy captain who flew in the lead position for the Blue Angels from 2009 through 2012.

In addition to these six highly respected former military pilots, nearly 150 aviation organizations around the country are also actively opposing the legislation.

“This is a deeply flawed piece of legislation that is opposed by the vast majority of people who understand the negative implications of this naked power grab by the airlines and their allies,” says John Cudahy, president of the International Council of Air Shows, the organization that produced the video. “These former military officers are speaking out because they are genuinely concerned that the legislation could permanently damage our country.”

In the video, the former military officers’ request is summarized by Lieutenant Colonel Richard McSpadden (U.S. Air Force, Retired) who led the Thunderbirds in 2002 and 2003: “We need your help to defeat this legislation that will damage our country’s economy and endanger a critical element of our transportation infrastructure.”