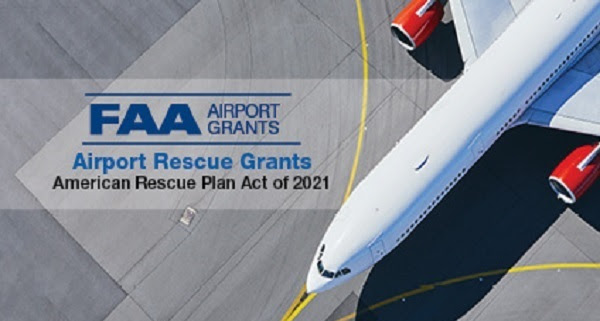 The U.S. Department of Transportation’s Federal Aviation Administration (FAA) will award $8 billion in grants to keep U.S. airport workers employed, construction projects going and help U.S. airports recover from the impacts of the COVID-19 pandemic. The funding for the grants comes from the American Rescue Plan Act of 2021 President Biden signed into law on March 11, 2021.

“The Airport Rescue Grants keep workers employed and help the aviation sector recover as more Americans get vaccinated and begin traveling again,” said U.S. Transportation Secretary Pete Buttigieg. “These grants are part of the Administration’s commitment to build back a better and safer transportation system throughout our country.”

The funding provides economic relief to eligible commercial service, reliever, and general aviation airports. The money will help keep people safe and employed by reimbursing operational expenses, debt service payments, and costs related to combating the spread of pathogens at the airport. Airports can also use the money to provide rent relief to in-terminal retail and concession companies. The funding requires that airports continue to employ at least 90 percent of their pre-pandemic employees for those airports that cover a majority of the traveling public.

“The FAA is committed to working with the aviation industry as it recovers from the impacts of the pandemic,” said FAA Administrator Steve Dickson. “These airport rescue grants provide needed support to our nation’s airports as we recover from the pandemic’s impacts.”

Under the Airport Rescue Grants program:

Among the hundreds of airports receiving funding today include:

For additional program information and the amount of funding each airport is eligible for, please visit the FAA’s website.