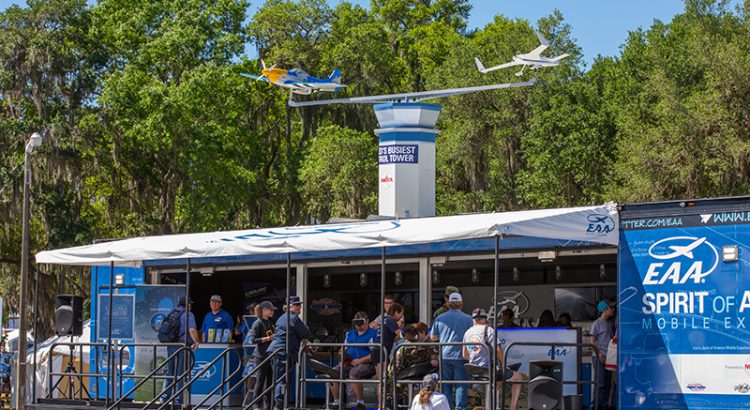 The Experimental Aircraft Association will again deliver the excitement of flight throughout the United States in 2019 as EAA’s “Spirit of Aviation” mobile unit, sponsored by the National Air Traffic Controllers Association (NATCA), visits numerous events this year. The traveling experiential exhibit introduces EAA to enthusiasts through hands-on, member-tested activities engaging people of all ages in aviation.

“Tens of thousands of people discovered the wonders of flight at the EAA Spirit of Aviation tour in 2018, including such distinguished visitors as Crown Prince Haakon of Norway, who visited us when we were at the South by Southwest conference in Austin, Texas, last year,” said Dave Chaimson, EAA’s vice president of marketing and business development. “More importantly, EAA’s Spirit of Aviation experience encompasses immersive activities and virtual reality, giving visitors a glimpse into flight and invites them to be part of EAA’s dynamic member community.”

The Spirit of Aviation mobile unit will be making 11 appearances in seven states during 2019. Upcoming visits throughout the year include (tour schedule subject to change without notice):

“It’s fun, it’s discovery, and it’s a fantastic introduction to the world of flight,” Chaimson said. “Stop by and bring the entire family. At selected locations, we are even bringing along our own Stan Lee-inspired superhero, Aviore, who was created through a cooperative effort by EAA and the Stan Lee Foundation in 2017 as an inspiration to young people all over the world, encouraging them to follow their passions and find their place in the sky!”

Visitors to EAA’s experiential marketing exhibit will be able to build their own Aviore gliders, supported by Flite Test, and take virtual flights with Samsung Gear VR headsets to connect with the Spirit of Aviation. There are also Redbird flight simulators for flight training experiences, hands-on building stations, and EAA’s Virtual Flight Academy as part of the organization’s mission to grow participation in aviation.