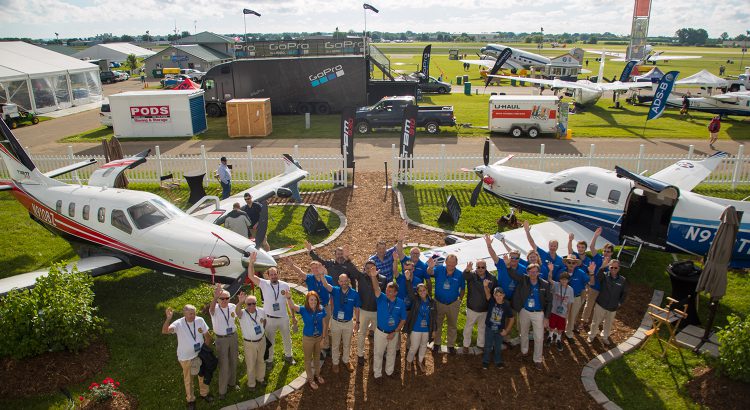 Daher recognized the TBM community’s strong presence at this year’s EAA AirVenture Oshkosh, with the participation of 60 TBM very fast turboprop airplanes – once again representing the largest number of turbine-powered aircraft at the annual fly-in.

Several TBMs made long flights to join the world-leading aviation gathering at Wittman Regional Airport, with eight coming from Europe (including an airplane piloted by David Fabry, manager of Flying Smart – the U.K. TBM distributor), and a TBM 900 from Sao Paulo, Brazil.

For its appearance at EAA AirVenture Oshkosh, Daher showcased its two latest production aircraft: the TBM 930 and TBM 910; and also brought the full-scale replica of the Morane-Saulnier Type L aircraft – a century-old ancestor to the TBM product line, which attracted a steady flow of visitors during the event, held July 24-30.

Daher concluded the sale of four pre-owned TBMs at Oshkosh along with two TBM 930s – one of which will be delivered to a customer in the U.S. state of Georgia. The other TBM 930 is for Canada – an important growth market for Daher – and will be based in the Toronto metropolitan area. The new Canadian owner, who is transitioning from a piston single-engine aircraft, was attracted to the TBM 930 because of its features and capabilities.

“EAA AirVenture Oshkosh was extremely positive for us this year, and mirrors the overall success of the 2017 show,” said Nicolas Chabbert, Senior Vice President of the Daher Airplane Business Unit, and President of SOCATA North America Inc., which is Daher’s subsidiary in the U.S. “This is an encouraging sign of recovery for our segment of the business aviation sector, which currently is very flat.”. …To read more, please click here.