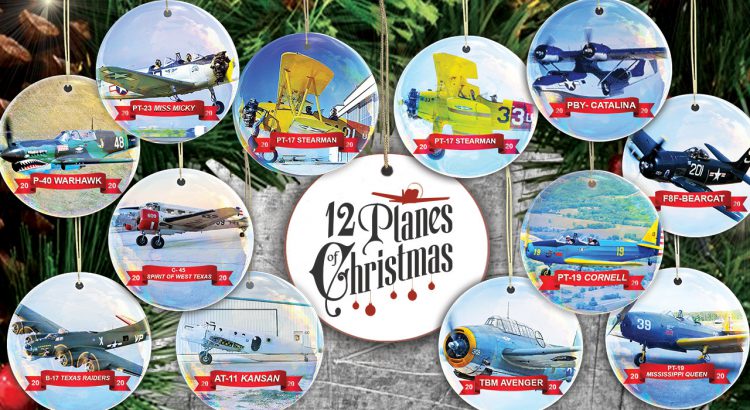 The Commemorative Air Force (CAF) has launched its “12 Planes of Christmas” campaign which helps restore vintage World War II aircraft to flying condition. Now in its sixth year, the annual online giving campaign runs from December 1-31, 2020. Individuals can learn about the campaign, select an aircraft to support, and make a donation at www.SupportCAF.org.

Recognized as the world’s largest flying museum, the Commemorative Air Force maintains a fleet of over 170 World War II aircraft, more than 70 percent of which are airworthy. The “12 Planes of Christmas” campaign supports the organization’s efforts, and those of its volunteer members, to restore the historic warbirds in preparation for flight and tours.

“Maintaining flying warbirds is one thing that sets the CAF apart from other aviation museums,” said Hank Coates, CAF president and CEO. “By flying these airplanes, displaying them at events, and allowing people to ride and tour them, we preserve and honor the legacy of the people who built, maintained and flew them during World War II.”

Each year, twelve aircraft from the CAF’s fleet are selected to be featured during the “12 Planes of Christmas” campaign. These aircraft represent some of most important contributions to the nation’s military aviation history and restoring them provides the public with a deeper understanding of the sacrifices made for the liberties enjoyed today.

The aircraft featured in this year’s campaign include:

The twelve airplanes selected for the campaign are not only historically significant; they are also chosen for their demonstrated impact in their respective communities.

“When contributing to the 12 Planes of Christmas, donors are directly supporting the CAF in a very tangible way – helping to maintain and return aircraft to the skies., said RozeLyn Beck, CAF Chief Relationship Officer. With the variety of aircraft showcased and the stories these aircraft represent, our hope is that many individuals will be inspired to contribute.”

The CAF does not receive government funding to restore and preserve these iconic aircraft. The airplanes are funded by ride revenue, aircraft appearance fees, but mostly by generous individual and corporate donations.

As part of the “12 Planes of Christmas” campaign, donations can also be directed to the CAF’s Restoration Grant Fund. Established in 2008, this matching grant fund doubles individual donations, helping return aircraft back to the skies faster. Through this fund, the public can help create tributes to the famed Flying Tigers and the Women Airforce Service Pilots (WASP), among other efforts. Since 2008, the Restoration Grant Fund has supported more than 50 aircraft across the nation, many of which have returned to flight.