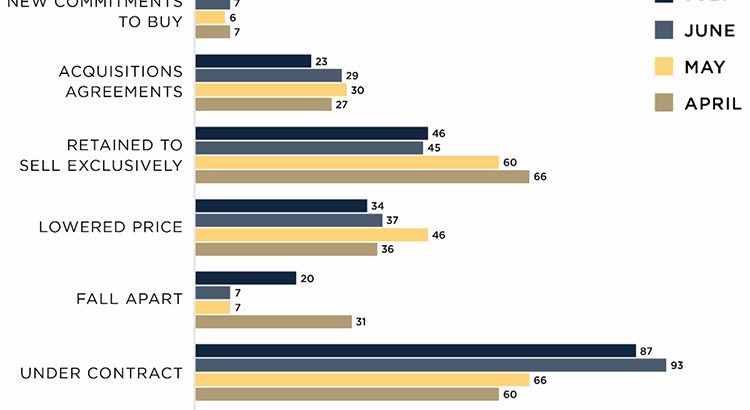 The pace of used aircraft sales picked up sharply in June and July after April/May doldrums brought on by the COVID-19 pandemic and its economic impact.

Dealers accredited by the International Aircraft Dealers Association (IADA) reported 103 closed sales transactions in July, more than three per day for every day of the month. In June the association members also had a good month, making 74 deals.

Those 177 deals in the past two months compare with 100 total in April and May, a 77 percent increase over the two-month period. In addition, August began with 87 additional aircraft under sales contracts. And fewer deals fell apart in June and July – 27 versus 38 in April and May.

“Our dealers reported exceptionally brisk activity in June and July after a protracted period in March, April and May where the deals were much harder to put together,” said IADA Executive Director Wayne Starling. “IADA dealers also experienced a reduced percentage of deals where lowered prices were integral to completing the deal.”

Overall, IADA accredited dealers registered 19 new commitments to purchase aircraft in June and July, and 52 acquisition agreements in the same period. The group also was exclusively retained to sell 217 aircraft in the past four months.

IADA is a professional trade association formed more than 25 years ago, promoting the growth and public understanding of the aircraft resale industry. IADA now offers the world’s only accreditation program for dealer organizations and the only certification program for individual brokers. Products and Services members are verified by the organization. The process delivers high standards of ethical business and transparency regarding aircraft transactions, leading to a more efficient and reliable marketplace.

For information on IADA go to www.IADA.aero. For info about IADA’s aircraft marketplace go to www.AircraftExchange.com.