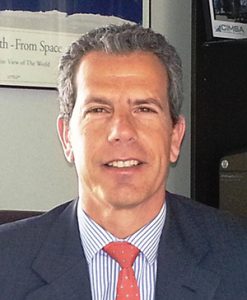 Fernando de Caralt has been named Chief Executive Officer of BRS Aerospace, the world’s leading designer and manufacturer of whole aircraft parachute systems. He was previously Senior Vice President of Engineering for the company, based in South St. Paul, Minn.

“Fernando’s engineering background and his wealth of experience in the aerospace industry will serve him well in this new role, leading the day-to-day operations of the company’s

Minnesota and North Carolina facilities,” said BRS Aerospace President Enrique Dillon. “The depth of his international background and his more than two decades of aerospace industry senior leadership will benefit the company’s future as we focus on providing the world with whole aircraft parachute solutions to satisfy a growing demand for increased aviation safety,” Dillon added.

Caralt holds a MBA from the IESE Business School at the University of Navarra’s Madrid campus, and a Bachelor of Science in Aeronautics and Astronautics Engineering from Purdue University. He has been with BRS Aerospace for the past five years.

Prior to that, he served the industry in a number of senior leadership positions, including President and CEO of CIMSA Ingeniería de Sistemas, a world class parachute company located in Spain and involved in design and manufacturing of all kinds of parachutes and aerodynamic stabilizers.

Additionally, he has served as a director of INGENIA Ingenieria Aeronautica AIE, an association of aeronautical companies in Spain, director and CEO of TAF Helicopters, S.A., a helicopter operator company in Barcelona. Caralt started his career as an aerodynamics engineer for Boeing Commercial Airplanes in Seattle, Wash. before joining Messerschmitt-Bolkow-Blohm, which would later become Airbus Helicopters.

BRS Aerospace is the world leader in whole aircraft parachute systems with more than 35,000 delivered to aviation segments including FAA/EASA Type Certified general aviation, Light Sport Aircraft, experimentals, ultralights, unmanned vehicles and military aircraft. The safety device has been successfully deployed multiple times and the company has documented 374 lives saved as a result of the safety device.

BRS Aerospace’s whole aircraft parachute system design calls for a parachute ballistic launcher to be installed in the aircraft with either a pilot-initiated activator located in the cockpit or an automated activation system. Upon activation, a ballistic rocket propels a parachute into the airstream to slow the airplane and float it down into a controlled landing. The system is designed to be a last resort for pilots and passengers when all other attempts to recover the airplane in case of emergency have failed.

BRS Aerospace was founded in 1980 in South St. Paul, Minn. It has manufacturing facilities at the South St. Paul Municipal Airport and in Pinebluff, N.C.For more information go to www.brsaerospace.com.