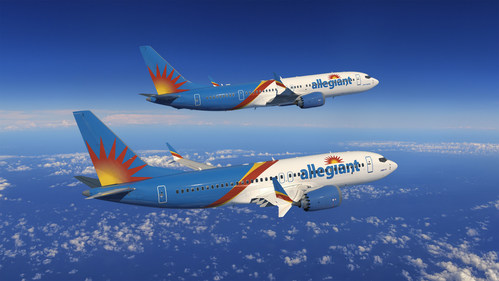 Allegiant Travel Company (NASDAQ: ALGT) announced an agreement with Boeing to purchase 50 new 737 MAX aircraft as part of the airline’s ongoing efforts to modernize and expand its fleet.

The multi-year deal – Boeing’s first with an ultra-low-cost carrier in the United States – includes the purchase of 737-7 and 737-8-200 models, as well as options to purchase 50 additional aircraft, giving the company flexibility for future growth. Allegiant will take delivery of an initial group of planes in 2023, with the remaining deliveries scheduled throughout 2024 and 2025.

“Our approach to fleet has always been opportunistic, and this exciting transaction with Boeing is no exception,” said Maurice J. Gallagher, Jr., Allegiant chairman and chief executive officer. “While the heart of our strategy continues to center on previously-owned aircraft, the infusion of up to 100 direct-from-the-manufacturer 737s will bring numerous benefits for the future – including flexibility for capacity growth and aircraft retirements, significant environmental benefits, and modern configuration and cabin features our customers will appreciate.”

Allegiant’s unique ULCC business model has been primarily focused on high quality used aircraft to maintain lower fixed costs. However, the pandemic recovery cycle has brought to Allegiant unique opportunities to acquire new equipment, including this aircraft-family solution, which will add significant economic and operational benefits for years to come.

The arrangement with Boeing will allow Allegiant to replace aircraft that are scheduled to retire while also expanding the fleet to maintain the company’s projected 10 percent-plus annual growth rate.

“We are thrilled that Allegiant has selected Boeing and the 737 MAX as they position themselves for future growth, improved efficiency and operational cost performance,” said Stan Deal, Boeing Commercial Airplanes president and CEO. “This deal further validates the economics of the 737 MAX family in the ULCC market, and we’re excited to stand alongside Allegiant as they integrate these new airplanes into their fleet.”

The aircraft will be powered with CFM LEAP 1-B engines. Allegiant has signed a 12-year exclusive maintenance agreement with CFM for the LEAP engine fleet, which will also bring support for the existing Airbus fleet. Allegiant currently operates 108 Airbus A319s and A320s and will continue sourcing A320s in the used market.