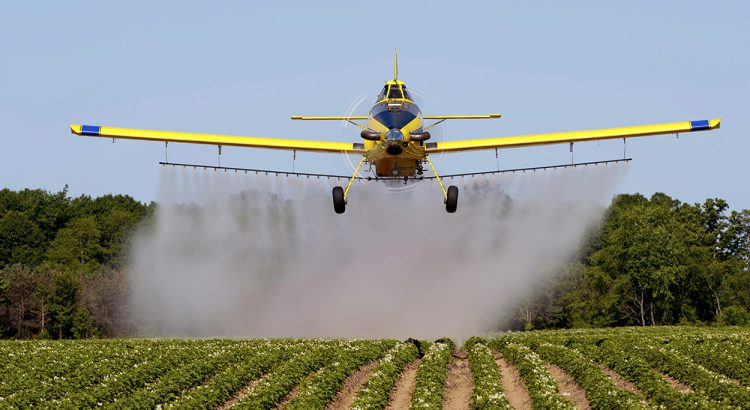 The summer of 2021 marks an important milestone in the extraordinary history of technological advancement in American agriculture. One hundred years ago on August 3, researchers, desperate for a way to prevent sphinx moth caterpillars from ravaging the valuable Catalpa tree crop, came up with a novel approach. What if the caterpillars could be controlled with insecticide dust dropped from an airplane?

View the timeline – a 100 years of Aerial Application

Far-fetched as it was in 1921, when farmers applied insecticides by hand and aviation was still in its infancy, the idea worked. In an experimental flight conceived by the Ohio Department of Agriculture, U.S. Army test pilot, Lt. John Macready, applied lead arsonate dust from a World War I surplus biplane over a Troy, Ohio Catalpa grove. The insect pests were successfully dispatched; the trees grown for use as telegraph poles and fenceposts were saved; and a practice now vital to crop production, wildfire-fighting and mosquito control was born.

State aviation officials from across the country have long understood the value and contributions of the industry. “Aerial applicators are crucial to boosting yields in Iowa’s multi-billion-dollar agricultural crop industry, and their positive impact to Iowa’s economy is proven,” said Tim McClung, Aviation Planning and Outreach Manager with the Iowa DOT – Modal Bureau. “Over the years, aerial applicators have been adopters of new aviation and applicator technologies that continue to make them relevant to Iowa’s farmers, and significant users of Iowa’s air transportation system.”

Dan Harmon, Aviation Division (AVN) Director at the Texas Department of Transportation, said the importance of aviation to agriculture cannot be overstated. “There is simply no more efficient method of coverage than aerial application – Period.”

Andrew Moore, CEO of the National Agricultural Aviation Association (NAAA) notes that the last century brought almost unimaginable innovation and technological advancement in agricultural production as a whole. “And no segment of agriculture illustrates that warp-speed progress more than how far we’ve come in aerial application.”

While it was a watershed event in agricultural and aviation history, the first recorded aerial application flight was just the precursor of what was to come. Macready’s lightweight, underpowered aircraft has evolved to the 1200 horsepower, turbine engine planes and high-performance helicopters that today treat more than 125 million acres (including fields treated more than once) of U.S. cropland each year. And the hand-cranked application device used in the 1921 flight has given way to the high-tech spray equipment, GPS systems, avionics and onboard data analytics capabilities that make possible the precision crop protection required on the farm today.

“Farming in the 21st century is a complex balance of maximizing yields while protecting the environment and preserving overall sustainability,” Moore says. “Aerial applicators’ efficiency and ability to apply fertilizer or attack pests at just the right time play a key role in helping farmers meet those demands.”

He adds, “Along with its essential place in agriculture, aerial application has become an important tool in forest management and wildfire fighting, as well as in public health for mosquito control. And it’s a safe bet that what began as an experiment in 1921 will continue to offer solutions to other challenges the world will face in the coming decades, like climate change and the increasing demand for food.”

Greg Pecoraro, President and CEO of the National Association of State Aviation Officials (NASAO) said that his organization is pleased to salute the centennial of Agricultural Aviation. “The safe and abundant food supply we enjoy today would not be possible without the use of aerial application of crop protection products, noted Pecoraro. “Agricultural aviation not only protects food and forestry products, but also plays a critical role in public health through combating airborne insects that spread disease such as West Nile Virus, encephalitis, and malaria. Agricultural aviation has had a tremendous impact on our world and is another key indicator of the tremendous benefits aviation has brought us in just over 100 years of existence.”

Kyle Wanner, Executive Director North Dakota Aeronautics Commission added that, “over the last 100 years, Aerial Application has transformed into an efficient and vital industry that provides support to our farmers during the times of the growing season that they need it most.”  Approximately 100 aerial applicator companies provide services to over 4 million acres of farmland each year in North Dakota and they help to ensure that farmers reach higher profitability levels while helping the overall food supply to be grown at a higher productivity level.  “Overall, this industry has helped our state and nation grow to become one of the most efficient agricultural producing areas in the world,” said Wanner.

In Nebraska agriculture is the largest industry and is the fourth largest crop production state in the U.S. “Aviation and agriculture grew up together in Nebraska,” said Ann Crook, Director of Aeronautics for the Nebraska Department of Transportation. “One reason I love being the director is because every citizen understands the importance of the ag industry and how reliant this industry is on aviation.  It’s extremely refreshing to be serving a population that innately understands the value of maintaining our system of airports rather than having to constantly justify their existence!”