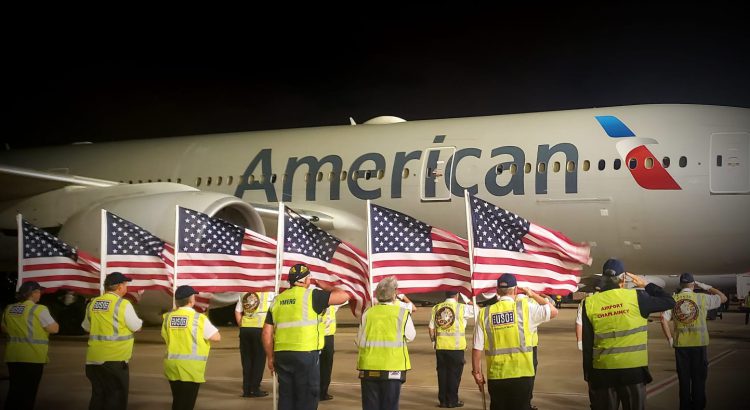 American Airlines (AA) Customer Care Manager Linda Kozma remembers it was a cold and rainy day, business as usual at Chicago’s O’Hare International Airport (ORD). As she walked the concourse, she noticed a military human remains transfer from the gate. Nothing atypical — small somber crew, flag draped — but nothing she had seen before. “My heart was aching for the loss — for the grieving family, for our country, for this soldier’s fellow troops,” she said. “That image is forever a part of me. In that moment, I said to myself, ‘We need to do better.’ And we did.”

Linda, a founding member of the ORD chapter of the Veteran Military Employee Business Resource Group, knew her fellow team members would feel as passionately as she did. They worked with branches of the military to develop a protocol for handling the remains of fallen soldiers from aircraft to hearse.

“I felt it was time to dedicate ourselves to ensuring both the dignity and respect for the deceased,” she said. “We learned how to identify and meet the needs of the military and the families of the deceased.”

The protocol Linda and her coworkers developed is currently used at ORD and is a result of a handful of dedicated team members who recognized a need to better honor our fallen service members. Similar processes are used at hubs across the system, where local Honor Guards conduct these ceremonies daily. The coordinated process involves many team members working behind the scenes from Flight, Flight Service, Control Center, Fleet Service, Customer Care and Cargo.

It is the actions of the American Airlines Honor Guard that most witness from the gates.

In coordination with every branch of service, the Honor Guard conducts planeside ceremonies as the service member is transported from an aircraft to a hearse. It is a dignified ceremony that was designed to pay tribute to their sacrifice and show appreciation and compassion for their families.

Made of volunteer team members, the Honor Guard is dedicated to serving fallen military and ensuring their return is given the utmost dignity, honor and respect while in the airline’s care.