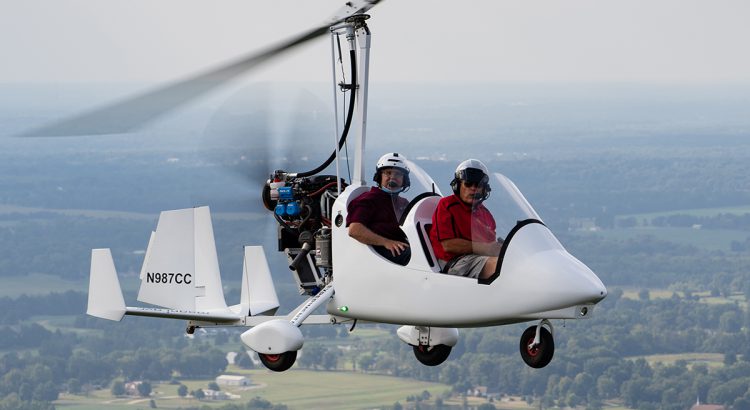 With nearly every aviation show cancelled this year, I was pleasantly surprised to find that the 12th annual Midwest LSA Expo was going to be held at the Mt. Vernon-Outland Airport (MVN) in Mt. Vernon, Illinois.  Previous Expos have always been informative and offered the ability to see and learn about the latest in LSA aircraft and equipment.  In addition, there were a host of seminars that were not only “approved” for WINGS credit, but sometimes there’s the opportunity to actually participate in demonstration flights before and after the scheduled activities.

Such was the case this year when I was offered the opportunity to do a photo flight in a gyroplane by Greg Gremminger of Magni USA based out of St. Genevieve, MO.   Ignoring all of the “warnings” about gyrocopters that I had received over the years from other “fixed wing” pilots, I threw caution to the wind and accepted the offer.  My son Chris and I were covering the Expo for Midwest Flyer Magazine and I thought that perhaps a little aerial photography might be a nice added touch.

Both of us, armed with cameras and radio equipped helmets, climbed aboard two Magni gyroplanes to “break the surly bonds of earth” and take some pictures.  Greg was my pilot/instructor and we flew a tandem seat dual control M-16 with a Rotax 915 turbo engine.  Chris was riding in a Magni tandem seat front control only M-22 with a 914 turbo Rotax owned by Dr. Henry Konzelmann, who incidentally was his college roommate when he attended Southern Illinois University at Carbondale.

The M-22 departed first with Greg and I following them in the M-16 shortly thereafter.  After an amazing 250’ lift off run, we climbed at approximately 500 ft./min.  However, with the larger engine, it could have easily doubled the rate.   With its increased speed, it didn’t take very long until we caught up with the other gyro.  We throttled back and began taking pictures of each other’s aircraft in flight.  Even though we were travelling around 70 mph, Greg indicated that our aircraft would normally cruise over 100 mph.

When we finished taking photos, Greg decided it was time for me to learn more about gyroplanes and specifically the Magni M-16.  Taking the controls, I noted how stable the aircraft handled.  In fact, when it was trimmed out, it needed little pilot input.  Taking it a little further and hands off the controls, he asked me to turn the aircraft by simply placing my arms in the slipstream….and walla, it began a gentle turn.   Besides doing climbs and descents to specified altitudes, we also went through a series of standard rate turns and practicing turns around a point.  Every pilot has to demonstrate turns about a point, but doing it without “wings” as a reference…made it a whole new ball game.

With sunset in the not-too-distant future, we headed back to the airport.  We slowed somewhat to allow other aircraft to land in front of us and then Greg began our final decent.  If you’ve experienced a decent and landing in a helicopter it’s more or less pretty standard.  However, to a fixed wing pilot cutting the power at several hundred feet over the numbers and landing an aircraft before the first turn-off is nearly impossible without having to complete an FAA report!

Amazingly enough, the aircraft rolled a little over 100’ after touching down although, if you were really trying, Greg said that it could have been closer to 25’.

After returning to the ramp, we continued our discussion on the capabilities of gyro aircraft.  Greg explained that there have been tremendous advances in engines, materials, and design that have contributed to increasing safety.  The addition of “tails” alone has not only increased stability, but reduced the number of “phugoid” (oscillations) type accidents that previously plagued gyrocopter aircraft.  This phenomenon seems to be closely tied to older gyrocopters when being flown by fixed wing pilots.   Perhaps that’s why gyros have been so maligned.

If you have never had the experience of flying a gyroplane, I highly recommend it, if nothing other than to understand its capabilities.  I think that you’ll probably be pleasantly surprised.  If you want more information, you’ll need to talk with a pro like Greg Gremminger.  His website at Magni Gyro USA (magniusa.com) provides a lot of great information about flying gyroplanes.

If you’d like to know more about the 2020 Midwest LSA Expo, please read my article and see Chris’s pictures in the Dec 20’/January 21’ issue of Midwest Flyer Magazine which is now available on-line at no charge.