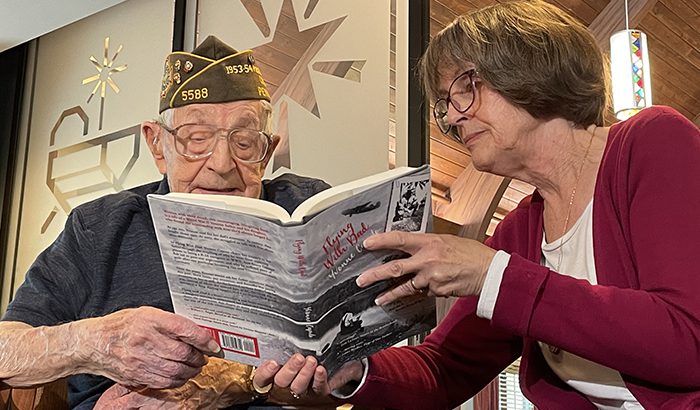 Photo above – Author Yvonne Caputo and Joe Haenn talk about Flying With Dad.

When I wrote Flying With Dad, I had no idea how many hidden gifts would come my way. The book, which chronicles my father’s life in aviation and how he got into WWII as a navigator on B-24s, has led to some interesting discoveries, one that raised the hair on the back of my neck.

One of those “hidden gifts” came with an introduction to a 104-year-old WWII veteran who was in the same bomb group as my father, the 467th located in Rackheath, England. He told me things that I wouldn’t have known about my dad, had we not connected.

Meeting this veteran came about through Facebook.  I posted a story about the book on the 467th’s Association page, and my eyes widened as the veteran’s granddaughter asked how she could get a copy of the book to her grandfather.  Back and forth messaging gave me the answer, and my heart jumped to learn that her grandfather, Joe Haenn, lived a little over 7 miles from me in a personal care home.  His daughter, Judy Herb, also lived near-by and we connected by phone.

She told me that the home was on lock down because of covid, but I could take a package to him and it would be delivered.  I learned through her that Joe loved oatmeal cookies. Both those and a copy of the book were delivered the next evening.  Judy called the following day to tell me that her father had read 120 pages of the book in one evening. This was the beginning of my weekly delivery of cookies and anything I thought Joe might appreciate.

What happened as our friendship progressed took my breath away.  How could such a thing be possible?

On April 27, 2020, I posted a story on the 467th’s page about my father being in a plane called the “Wabbit” when it crashed.  The crew were on a training mission with the co-pilot in the pilot’s seat, gaining the necessary flight hours to become a fixture in the left seat.  Bad weather limited the training, so the pilot requested touch and go landings.  The first two were successful, but the third wasn’t.  The pilot recognizing that take-off wasn’t going to happen safely, hit the brakes, and at the same time one of the engines sputtered.  The plane’s nose tilted downward hitting the runway and slamming into the soft dirt off the end into an alfalfa field.

Dad climbed up through the escape hatch at the top of plane, slid down to the wing, and jumped off.  He landed breaking his leg.  His was the only injury; all the other crew walked away.

Joe’s granddaughter posted in the comment section that he was the assistant crew chief for the “Wabbit.”  Learning this I called Joe and asked him if he had seen the crash. He hadn’t but he did see the plane.

He was out on the airfield when he heard the crash.  He and many others went immediately to the site.  When he got there, none of the crew were around.  When I asked about the condition of the plane, he said, “The nose was disintegrated, had anyone been in the nose they wouldn’t have walked away.”

The hair on the back of my neck raised as I thought about his words.  Dad’s normal position during bombing missions was in the nose of the plane.  Because it was a training mission, he was up on the flight deck.

The weight of Joe’s story hit me like a ton of bricks.  Dad essentially walked away, and I was born twenty months later.  Of more significance, the man who helped to keep the “Wabbit” running in top condition had seen the wreckage.  His words to me made me feel like the luckiest women alive.