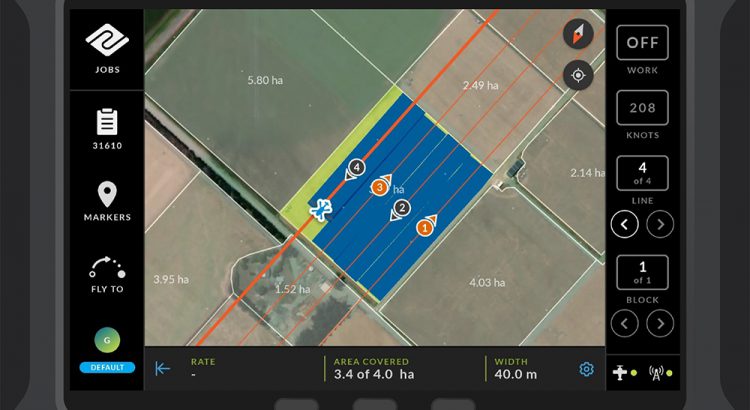 TracMap, a New Zealand based technology company has launched the new TML-A GPS aviation guidance unit delivering efficiency and accuracy for jobs in the aerial application industry, through a cutting-edge touch screen experience.

“When TracMap embarked on the journey to build their next generation of GPS guidance for the Aviation industry, we knew we wanted to re-imagine the role GPS guidance could play in the pilot’s day,” says Gus Hewitt, Head of Sales at TracMap.

Research would quickly highlight a dated marketplace, full of reliability issues and a number of products delivering the same experience with minor twists.

“It was time to re-think and it was time to talk to the people who would know best, our customers,” Hewitt adds.

Brutal honesty is where this product began, hearing countless stories from pilots about the good, the bad and everything in between. “We even had pilots who had punched in another technology provider out of frustration,” describes Hewitt.

But from the stories, a clear pattern of desires from the industry started to emerge, “We are on our fourth generation of TracMap GPS’s,” Aspen Helicopters Founder and VP Rob Scherzinger says.  “Their reliability is outstanding but equally important is the service and support that we get from TracMap.”

It was time to build something that would provide a new level of safety, it had to be as easy for someone to learn at 70 as it would be for someone at 25 and it would have to be the platform for new functionality in the ag aviation market.

This is where TML-A was born. Fast forward to today and TracMap is excited to release a product that is a remarkable leap forward on anything that has been seen before.

Gerald Harrix, TracMap founder and pilot himself, has watched TracMap products develop since 2006 and says TML-A is, “everything a pilot could dream of and more.”

This debut product offers increased customer benefits. The user experience is not just easy to use, it is enjoyable to use. It encompasses features such as auto brightness, night mode, auto zoom and a first for the industry, pilot profiles. The pilot profiles allow all of a pilot’s settings, from lightbar to hardware buttons to instantly sync across, no matter what aircraft they may be in.

“Safety has been another hallmark of this product, leading it to be endorsed by industry regulators as the ‘gold standard’,” according to Hewitt. “The ability for wires and other hazards to be saved universally means if one pilot marks a hazard, it will show up for all other pilots. Not only is there a building database of hazards, the pre-set lightbar warnings will give pilots significant warning in the line of vision, without needing to check a screen to see where something may be.”

The addition of satellite and topographic maps has been added to provide further details to a job and helps a pilot prepare for flight paths with a deeper level of knowledge as to where he is heading.

“But this wasn’t a product built behind closed doors, TracMap knew it had to be reliable, and that meant time in the field and putting it through every test under the sun, including the sun itself… in our heat tests,” Hewitt outlines.

Ultimately, this is a product that’s success will be judged by pilots. “This is why we have been quick to put it through its paces with customers,” Hewitt continues. “In the early stages of this product we have been overwhelmed by the feedback from pilot’s and enjoyed implementing many of the great new ideas that have come up.”

TracMap launched its first GPS Guidance System in 2006 in New Zealand and has since expanded globally including North America, the Middle East, South Africa and Australia. It is an exciting new chapter for TracMap, a company that is set to take on the world with a product that is truly ahead of its time, he adds.