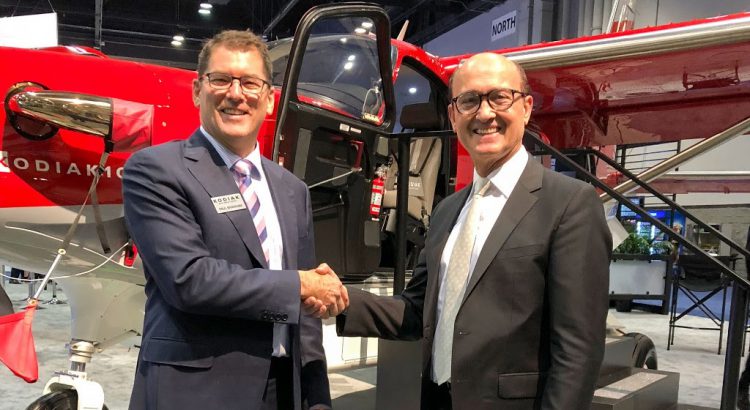 Photo above – Paul Branham, Vice President of Special Projects for Quest Aircraft, and Homer Constantinides, Managing Director at Airflite, shake hands after the announcement at NBAA 2018.

As a part of Quest Aircraft Company’s continuous efforts to provide an industry-leading global sales and support network, the company announced today the appointment of Airflite Pty Ltd as the exclusive sales representative for Australia and New Zealand.

“We’re pleased to announce Airflite as an authorized sales representative for the Kodiak,” said Paul Branham, Vice President of Special Projects for Quest Aircraft. “They embody the same core values that we do at Quest. They are progressive, professional and committed to excellence.”

Homer Constantinides, Managing Director at Airflite said, “We’re delighted to be named as the authorized sales representative for Quest Aircraft, and we’re looking forward to taking delivery of our first Kodiak 100 Series II. The Kodiak is well-suited to the varying environments in Australia and New Zealand.”

Nick Jones, Vice President of Aircraft Sales at Airflite added, “Our customers value flexibility, and that is exactly what the Kodiak delivers. With large loads, and the Kodiak’s superior rugged design, we anticipate the Kodiak will be a popular choice for many.”

Headquartered at the Perth Airport in Western Australia, Airflite has additional sales and maintenance locations at the Moorabin and Jandakot airports, and FBO Lounge locations across Australia.