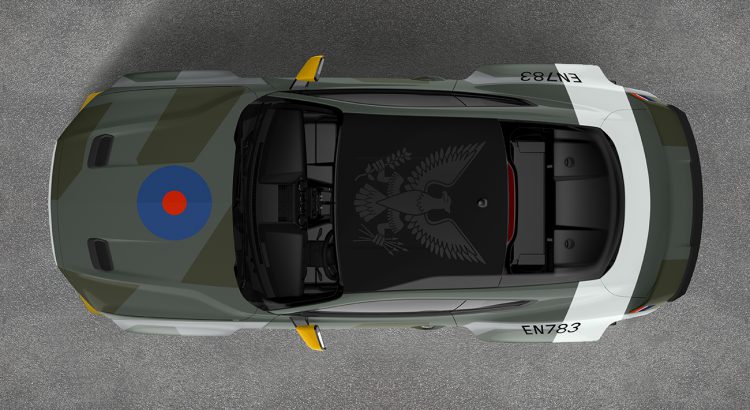 The vehicle, specially designed and built by Ford design engineers as well as drifting champion Vaughn Gittin Jr. and his RTR Vehicles group, will be up for bid during EAA’s biggest fundraiser, The Gathering, on July 26. The Gathering, which draws more than 1,000 aviation enthusiasts each year, is part of the 66th annual Experimental Aircraft Association fly-in convention on July 23-29 at Wittman Regional Airport in Oshkosh.

“For 20 years, Ford Motor Company has supported EAA’s programs to build the next generation of aviators through commitments such as these one-of-a-kind collector vehicles,” said Jack Pelton, EAA CEO/Chairman. “This exclusive automotive salute to the 100th anniversary of the Royal Air Force and the famed Eagle Squadron of World War II makes this Mustang GT an even more desirable highlight of The Gathering auction.”

More information on the bidding process is available by contacting EAA at Gathering@EAA.org or by calling 920-426-6573.

After the car is completed in early July, it will make its first appearance at the Goodwood Festival of Speed in the United Kingdom on July 12. Gittin will pilot the supercharged Mustang GT up the famed Goodwood hill climb. Following that appearance, the car will be transported to the U.S. for its unveiling at AirVenture.

The high bidder for the vehicle will also receive an all-inclusive package for two to attend the 2018 Ford Woodward Dream Cruise in Detroit, Michigan, in August, where they will receive their vehicle as well as a plaque autographed by Gittin and members of the Ford design team.