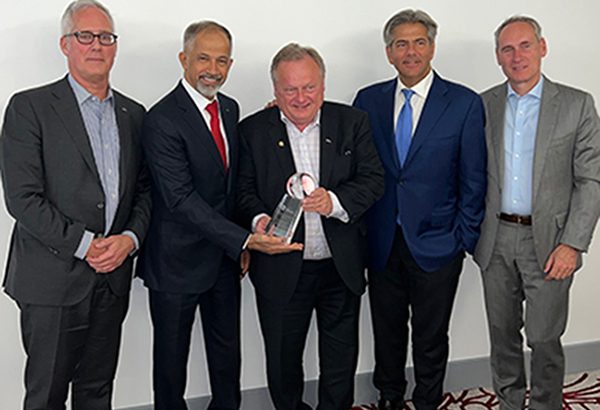 The International Business Aviation Council (IBAC) has announced the first recipient of the François Chavatte Award: Leo Knaapen of Bombardier. This special recognition honors Mr. Knaapen’s persistent advocacy and promotion of the international business aviation industry. Mr. Knaapen has worked for Bombardier as Chief, Industry Affairs, and has served as representative to the IBAC Governing Board for Industry Partners.

IBAC Director General Kurt Edwards said, “We were excited to announce Leo as the first recipient of the François Chavatte Award at our Governing Board meeting following EBACE.” François Chavatte dedicated his career to advancing the European business aviation industry. Chavatte was a pilot on the first transatlantic business aircraft flight to land at Le Bourget Airport in 1961, sparking the growth of one of Europe’s most prominent business aviation airports. Chavatte’s commitment to business aviation extended beyond his dayjob. He co-founded in 1977 the organization that became known as EBAA and later served as its President and Chairman of the Board. He served also as EBAA’s representative on the IBAC Governing Board.”

Chavatte passed away last year. In honor of his memory, IBAC established this award to recognize business aviation leaders who have gone above and beyond to contribute to the industry’s advancement and growth.

Edwards continued, “It was fitting to have this award go first to Leo, an extraordinary advocate for business aviation, for his tireless work on behalf of the industry.  He has been our friend and a strong IBAC supporter for many years.  We are grateful to Bombardier, an IBAC Industry Partner, for supporting Leo’s work with our association as well as with many other associations, committees, and coalitions that work to improve our industry.”