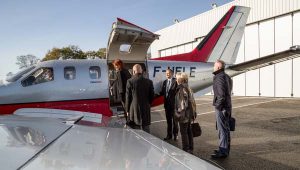 The European Union’s approval of Commercial Air Transport operations for single-engine turboprop aircraft in instrument meteorological conditions (IMC) and at night has been welcomed by Daher, whose TBM very fast turboprop family is increasingly utilized worldwide on such flights.

When the new regulations become effective on March 22, operators will have expanded opportunities to deploy single-engine turboprop aircraft on charters, corporate services and in other missions – benefitting from their efficiency and speed.

Based on the excellent safety record of such turboprop aircraft – including Daher’s TBM product line – approval for their commercial operation in IMC and at night has been granted progressively in North America and elsewhere around the world, except Europe.

Supporting the changeover in Europe were national authorities such as France’s Direction générale de l’aviation civile (DGAC), which granted an Aircraft Operator’s Certificate in 2013 to Voldirect, an air taxi company based in western France at Rennes Bretagne Airport. An exemption for its commercial flights in night/IMC conditions was provided by the European Aviation Safety Agency (EASA).

As a result, Voldirect became the first to operate commercial flights with a TBM in Europe, subsequently carrying some 2,100 passengers and logging 1,200 hours with a single TBM 850. This spring, Voldirect is introducing a second TBM 850 at its new base in Lyon, with a third is planned for an airport location to be announced.

Another operator, St-Barth Executive, situated at the Gustaf III Airport on the Caribbean island of Saint-Barthelemy, has applied for a French Aircraft Operator’s Certificate, and plans to be the first commercial operator of a TBM 900 version based in the French Antilles.

“The determination and hard work of operators such as Voldirect’s Frédéric Caussarieu and Vincent Beauvarlet from Saint-Barth Executive, along with leadership of the DGAC and EASA in bringing regulatory change, have been paramount in convincing European Union to allow commercial operations with single-engine turboprop aircraft,” said Nicolas Chabbert, Senior Vice President of the Daher Airplane Business Unit. “We expect to see the TBM increasingly deployed in charters for on-demand transportation – especially from community airports, with operators benefitting from our aircraft family’s speed, economical operating costs and the ability to serve smaller runways.”