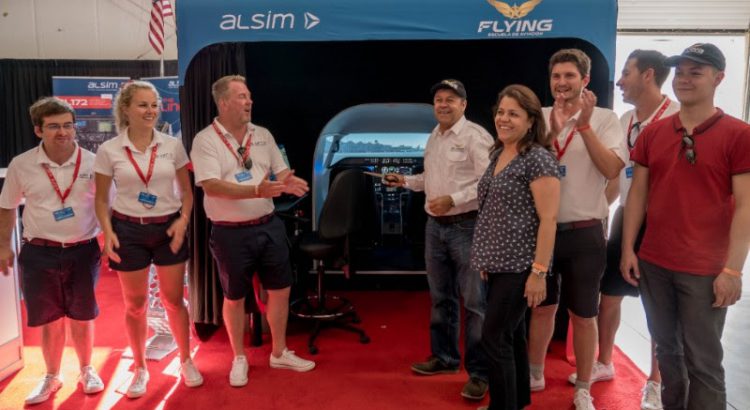 Alsim has announced that the AL250 simulator that was on display during EAA AirVenture Oshkosh 2018 is going to a Colombian flight school, Escuela de Aviacion Flying. Captain Fabio Montoya, the school’s Managing Director, accepted the AL250 at Alsim’s booth during a ribbon cutting ceremony. (See photo above) It will be installed in early September.

The AL250 simulator addresses initial phase training needs (PPL, CPL, IR/ME) and is SEP/MEP re-configurable. In addition, it offers both classic and glass cockpit instrumentation for each flight model at the simple flick of a switch. This device has been extremely well received since its creation and more than 20 of these have already been sold and are in successful operation worldwide.

Captain Fabio Montoya, Escuela de Aviacion Flying’s Managing Director, explains the reasons why they chose Alsim’s AL250, “We are proud to have a compact simulator, approved to accurately simulate PBN/LNAV (Performance Based Navigation/Lateral Navigation), LNAV/VNAV and LPV (Localizer Performance with Vertical Guidance) operations. Keeping into account the current needs of the industry and the constant development of the world’s air navigation, the AL250 is re-configurable for single or multi-engine aircraft, analogue or electronic instruments (EFIS) and last generation software, attending in this way the requirements for private, commercial and instruments pilots.”