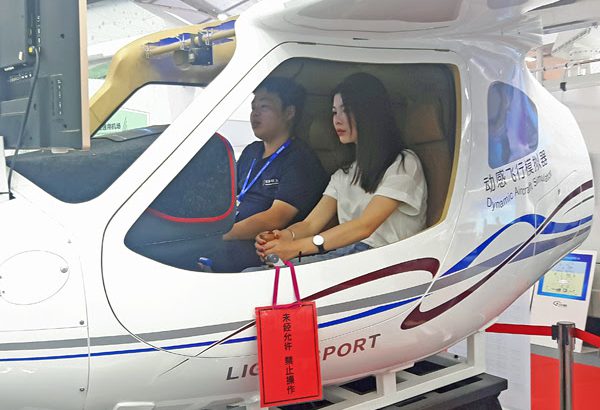 AeroJones Aviation Technology Co., Ltd. is the manufacturer of a modern and sophisticated light aircraft named CTLS. The AeroJones aircraft factory began production and is located in Xiamen, China. However, that location will be changing.

“At the Zhuhai Airshow, our AeroJones 6-axis of motion CTLS simulator was shown for the first time to the public,” said Michael Chou, who handles marketing for the company.

“The cabin scale is 1:1 of the flying CTLS,” added Mr. Chou. “Our simulator is equipped with two Skyview digital panels designed by Dynon Avionics in the USA. The simulator has dual control sticks and rudders so an instructor can help a student learn the procedures and perform maneuvers. For the general public, it is a great device for entertainment.”

“Our flying CTLS also received lots attention in the show,” said Chou. “The market is growing for Chinese general aviation. We visited with many prospective customers from flight clubs and flight schools that expressed interest in the AeroJones CTLS.

As recently announced AeroJones will begin work on a brand new aircraft factory in Zhenjiang, China. With the new Zhenjiang facility, all manufacturing steps will be easier, less costly, and much more efficient, which will contribute to better values for customers buying the CTLS. Flight schools or other buyers of the modern and sophisticated CTLS will be able to fly to Dalu General Airport to see the factory and take demonstrations flights to confirm their purchase.

At the time the new factory was announced, Mr. Jones Chen said, “We are very pleased about the relationship with leaders of Zhenjiang. We look forward to a long and prosperous relationship.”