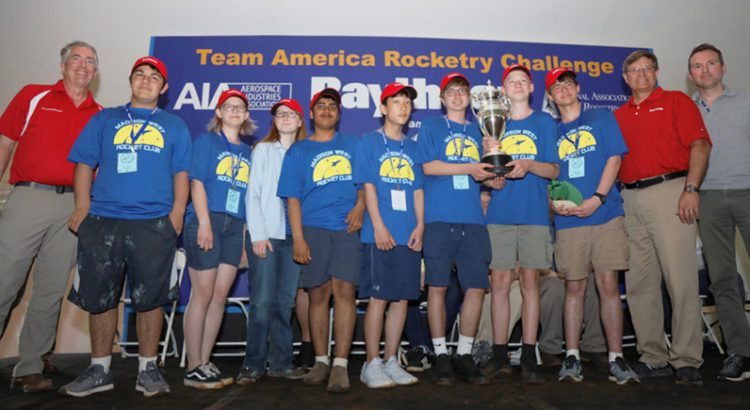 The students from Madison West will now represent the United States at the International Rocketry Challenge at the Paris International Air Show in June, facing off against teams from France, the UK, and Japan.

“This feels amazing – I didn’t expect us to win today,” said team captain Jacob Mello. “We really didn’t know each other well at the beginning of the year, but we became friends and pulled together as a team. We encouraged each other, which really helped us today. There’s a lot of pressure to keep up America’s winning streak in the international competition, but we’re looking forward to it.”

The team’s victory follows months of preparation designing, building, and testing a rocket capable of meeting rigorous mission parameters set by the contest’s sponsors – the Aerospace Industries Association (AIA), National Association of Rocketry, and more than 20 industry sponsors. This year’s rules celebrated the 50th anniversary of Apollo 11 by requiring each rocket to carry three eggs in a separate capsule to symbolize the three astronauts that made the journey to the Moon and back.

The Top 101 teams, hailing from 25 states from Hawaii to New York, competed for a total of $100,000 in prize money and scholarships at the national finals – an all-day event held at Great Meadow in The Plains, Va., outside of Washington, D.C. The $100,000 prize pool will be split among the Top 10 teams, with Madison West taking home the top prize of $20,000 as U.S. champions. In addition, the top twenty-five finishers receive an invitation to participate in NASA’s Student Launch initiative to continue their exploration of rocketry with high-powered rockets and challenging mission parameters.